Movie Review: The Pursuit of Happyness 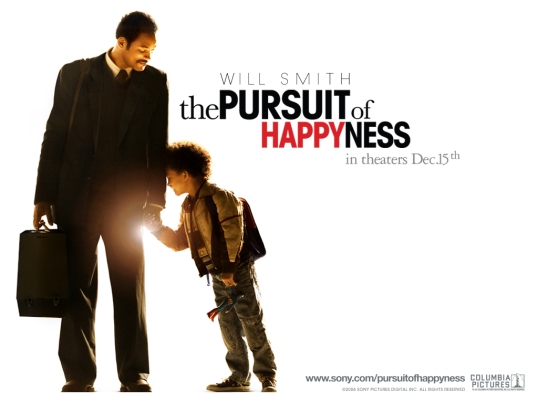 Last night, at the request of my girlfriend, I watched The Pursuit of Happyness starring Will Smith. To my delight, it was an excellent movie based on the true story of Chris Gardner. While the ending is predictable, it’s also gratifying and inspiring. Out of all the dramatic roles I’ve seen him play, this is Will Smith’s best. He convincingly conveys the heartbreak and struggle of a man doing his best to get by, move up and provide for his family. And being a fan of Wall Street, I smiled when I saw James Karen in the film as a big-time stock broker. The rest of the supporting cast, including Will Smith’s real-life son, Jaden Smith, were equally enjoyable in their roles. The movie’s score, composed by Andrea Guerra, is also worth noting because it effectively amplifies the deep emotions weaved throughout the film. Overall, this is a great movie that I highly recommend you check out.

Will Smith stars in this moving tale inspired by the true story of Chris Gardner, a San Francisco salesman struggling to build a future for himself and his 5-year-old son Christopher (Jaden Smith). When his girlfriend Linda (Thandie Newton) walks out, Chris is left to raise Christopher (Jaden Smith) on his own. Chris’ determination finally pays off when he lands an unpaid internship in a brutally competitive stockbroker-training program, where only one in twenty interns will make the cut. But without a salary, Chris and his son are evicted from their apartment and are forced to sleep on the streets, in homeless shelters and even behind the locked doors of a metro station bathroom. With self-confidence and the love and trust of his son, Chris Gardner rises above his obstacles to become a Wall Street legend.