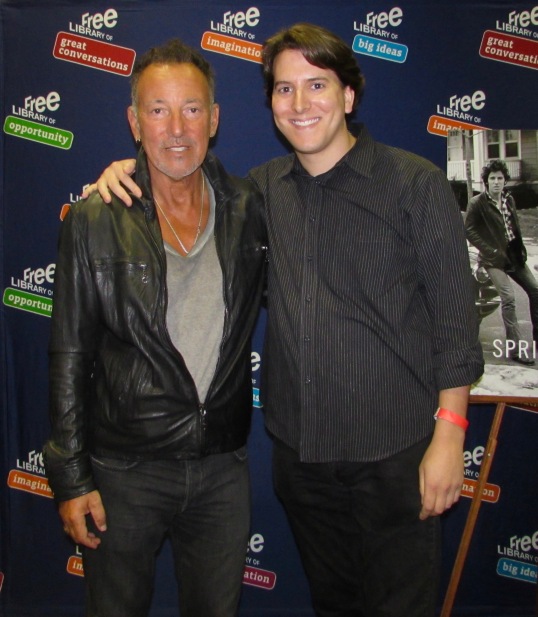 Three weeks ago I attended my first Bruce Springsteen concert. Today I met “The Boss.” Well, to be accurate, I did see Bruce perform with The E Street Band when they were inducted into the Rock & Roll Hall of Fame two years ago. I was there with my cousin, mainly to see KISS and Hall & Oates be inducted, but seeing Bruce rock out, along with several other rock icons, made for an entertaining evening full of music. Nevertheless, the Bruce Springsteen concert I attended three weeks ago was my first time seeing a full-length performance by New Jersey’s favorite son, and it was awesome. It was also the longest U.S. concert he’s ever performed. But enough of that. Let me tell you about Bruce’s event at the Free Library of Philadelphia promoting his new autobiography: Born to Run. 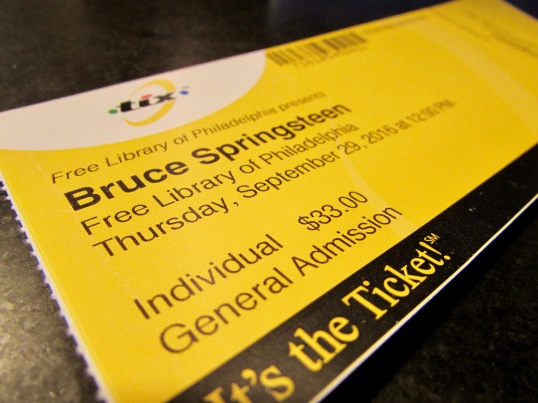 This event was billed as a meet and greet, not a book signing. In other words, the big selling point of this event was that you could shake Bruce’s hand, say a few words to him and pose for a photo with “The Boss.” To me, this was an exciting proposition. The way I see it, you can buy an autographed book on eBay if you want it badly enough, but you can’t buy a photograph of yourself with Bruce Springsteen online. Therefore, this event, which cost only $33 to attend, was worth way more than they were charging. Unfortunately, tickets for the event sold out in six minutes when they went on sale. I had tickets in my cart but the site crashed and when I refreshed the page it said: “This event is sold out.” Thankfully, I spoke with several people at the library who straightened things out and provided me with a ticket to attend the event.

The meet and greet was scheduled to take place from 12 to 2 p.m., but Bruce showed up 90 minutes early for a similar event in Freehold earlier in the week, so I knew to arrive early to ensure I wouldn’t miss out on meeting him. I figured 10 a.m. was early enough. I was wrong. By that time there were already hundreds of fans in line. So many that the line wrapped around the block. By the time the doors opened and people started to file in, there were 1,200 Bruce Springsteen fans waiting to meet their idol. And many of us were clutching umbrellas, trying to make sure the constant drizzle didn’t ruin our hair or outfits. Who wants to look like a drowned rat in their photo with Bruce Springsteen? Not me.

While waiting in line I met and spoke with several fans, many of whom had seen Bruce live numerous times. It was great hearing their stories and speculating with them about what to expect from this meet and greet. As I inched my way closer to the door, I pulled out my ticket and got my camera ready. After crossing the threshold of the library, I was greeted by an employee who scanned my ticket and I was given a wristband. A table filled with autographed copies of Bruce’s book was right in front of me and I was handed one as I passed by. Everyone turned to the left and was led down a hallway to a wing of the library that was closed off specifically for this event. 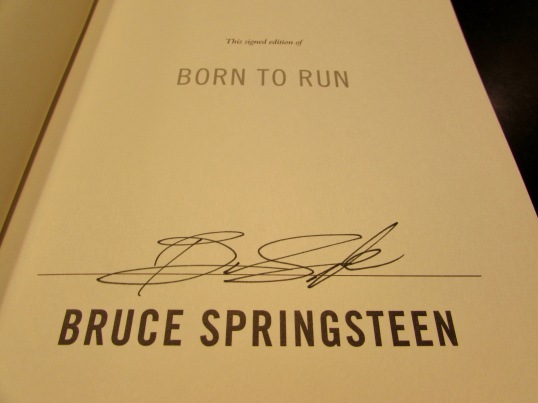 I entered the room and peered to my right where I saw Bruce in front of a step-and-repeat banner emblazoned with the library’s logo. An employee took my umbrella, bag and jacket and another took my camera. I instructed her to press and hold the button until the camera flashed. I find that since we’re all so used to using smartphones many people no longer know how to use a traditional camera, so I wanted to make sure she understand how it worked. After all, they were only going to take one photo of me with Bruce, so it better be a good one. I was told to stand on a black marker, right next to the person about to meet Bruce. After a few seconds I approached “The Boss,” shook his hand and said, “Bruce, it’s a pleasure to meet you.” He said, “Thanks, it’s great to meet you too!” I put my around around him and we faced the photographer who snapped the photo. I turned to him and shook his hand saying, “Thanks, Bruce. I really appreciate it. Have a great day!” He replied, “Thanks, you too!” I was then ushered out of the building, along with all of the other fans who had just met him. As I expected, it was incredibly fast. But I got to meet and interact with an American icon, get my photo taken with him and leave with an autographed copy of his autobiography. It doesn’t get much better than that.