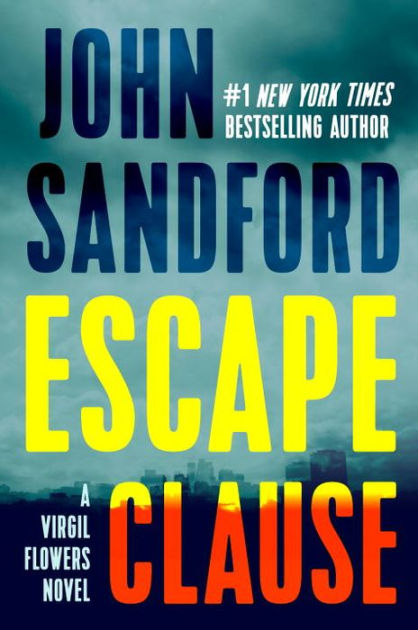 I’ve met John Sanford twice and seen him speak multiple times at ThrillerFest over the past few years, yet I’ve never read one of his novels…until now. I just finished Escape Clause last night and it was a solid novel with some major flaws.

The main storyline kept my attention the whole way through and the dialogue was entertaining. However, the subplot was boring and could have been cut out completely and there wasn’t a single twist in this novel. I was so disinterested in the subplot that I skipped paragraphs and chapters referencing it because I really didn’t care about it at all.

This novel is categorized as a thriller, yet there were no twists. Everything that happened was completely expected. I found this to be disappointing, as I prefer books that keep me guessing from beginning to end.

With these two complaints in mind, I can’t wholeheartedly recommend Escape Clause. It’s by no means a bad read, just an average one. You’ll be entertained by it, but chances are you won’t remember it long after turning the final page.

The first storm comes from, of all places, the Minnesota zoo. Two large, and very rare, Amur tigers have vanished from their cage, and authorities are worried sick that they’ve been stolen for their body parts. Traditional Chinese medicine prizes those parts for home remedies, and people will do extreme things to get what they need. Some of them are a great deal more extreme than others—as Virgil is about to find out.

Then there’s the homefront. Virgil’s relationship with his girlfriend Frankie has been getting kind of serious, but when Frankie’s sister Sparkle moves in for the summer, the situation gets a lot more complicated. For one thing, her research into migrant workers is about to bring her up against some very violent people who emphatically do not want to be researched. For another…she thinks Virgil’s kind of cute.