An Evening With Dan Brown 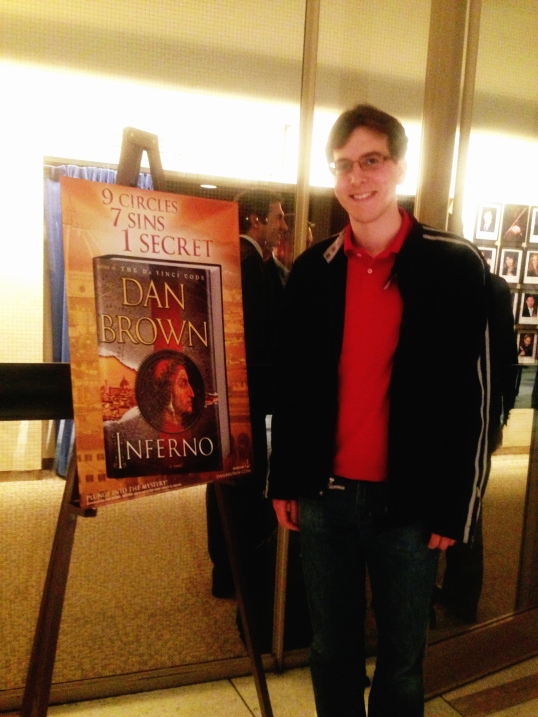 Last night my girlfriend and I went to New York City to see best-selling author Dan Brown speak at the Lincoln Center’s Avery Fisher Hall about his illustrious career and new novel, Inferno.

The evening’s festivities started with an introduction by TODAY Show anchor Matt Lauer. He was his usual charming self and showed a clip of a recent interview he did with Brown at his home in New Hampshire. Speaking of which, Brown’s opulent abode features multiple secret passages and a “fortress of gratitude,” which contains the myriad versions of his books that have been published around the world.

After the clip ended Lauer introduced Brown, who was met with a warm round of applause. Brown’s hour-long presentation covered a variety of topics, including his childhood, feedback from fans and critics on his work, and a humorous story about what it was like to have Tom Hanks fasten Brown’s kilt prior to a social gathering for the film version of The Da Vinci Code.

The underlying theme that’s weaved through many of Brown’s most popular novels are whether humans should turn to faith or science for answers to challenging questions. He explained that being the son of a “church lady” and mathematician had something to do with his fascination with this eternal struggle. It was also interesting to learn that Brown grew up in a household with no TV or junk food, but plenty of books.

His new novel, Inferno, takes place in Florence and it focuses on the first part of Dante Alighieri’s 14th-century poem, Divine Comedy. “With the exception of the Bible, no book in history has influenced more art, music or literature than the Divine Comedy,” said Brown.

The most interesting part of the evening came at the end, when Brown said the following:

“There is nothing in our DNA that predetermines our beliefs. We’re not born into this world believing that a particular god is the true god; we’re born into a culture. We worship the gods of our parents. If all of us in this room had been born in the mountains of Tibet, most of us would be Buddhists. And we would hold onto that Buddhist philosophy with the same passion that we have for our current beliefs. We worship the gods of our parents. It’s truly that simple.

The world is getting smaller every day. And now, more than ever, there is enormous danger in believing we are infallible, that our version of the truth is absolute, and that everyone who does not think like we do is wrong and are therefore enemies. For our own survival, it is critical that we live with open minds, that we educate ourselves, that we ask difficult questions, and above all, that we engage in dialogue, especially with those whose ideas are not our own.

So in the name of the dialogue we share and ideas, I just wanted to acknowledge that tonight, what has brought us together in this space is quite simply, books. Those magical artifacts that share ideas across borders, across cultures, across languages, and most importantly, across time. So for all of you in the audience that write books, publish books, sell books, and above all, read books, thank you.”

Overall, it was an enjoyable event that provided a rare glimpse into the mind of one of the most talented modern-day authors. As a parting gift, everyone in attendance received a free copy of Inferno. Since most people read books based on recommendations they receive either in-person or online, this was a smart idea.

Look out for my review of Inferno within the next several weeks. From what I’ve heard thus far, it’s an epic yarn.

2 thoughts on “An Evening With Dan Brown”