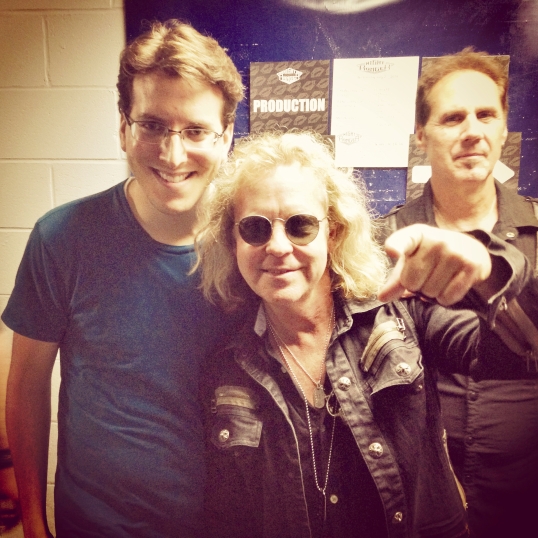 On Wednesday night I went up to New York City to catch Night Ranger’s concert at B.B. King’s. I was fortunate enough to meet the band backstage, as you can see from the photo above with me and Jack Blades…and Kelly Keagy peering over our shoulders.

While I was waiting in line to get into the venue, I was speaking with a couple guys behind me about Night Ranger and music in general. Once the doors opened, we said goodbye and went our separate ways. When I picked up my meet and greet pass, I was delighted to see there were two of them. While looking for a table, I spotted one of the guys I was speaking with earlier and joined him. I turned to him and said, “How would you like to meet Night Ranger?” He told me he had never done a meet and greet and was interested in taking me up on my offer.

My new friend, Albert, and I lined up to the left of the stage and waiting to be led backstage to meet Night Ranger. I noticed a couple KISS shirts on the fans in line and it made me think of the first time I was introduced to Night Ranger’s impressive catalog of music: KISS Kruise III. I assumed the KISS-clad guys in line also saw Night Ranger on this rock and roll sea voyage and were just as impressed by them as I was.

When Albert and I made it backstage, we were directed to the left where the band was standing and taking photos with fans. I approached Jack Blades, gave him a politician handshake where you lay your free hand on top of the person’s hand that you’re shaking. I have no idea why I did this, but it seemed perfectly natural at the time and Jack didn’t seem to mind. Him and I spoke for a little bit and I reminded him of our interview a month or so ago. After Albert and I took a photo with the band, I asked Jack for a photo with just him and I, which is what you see above.

On our way out of the backstage area, we were given an autographed copy of Night Ranger’s new album, High Road, and a cool pin set. I was also able to get a hold of a couple of Brad Gillis’ guitar picks later that night. 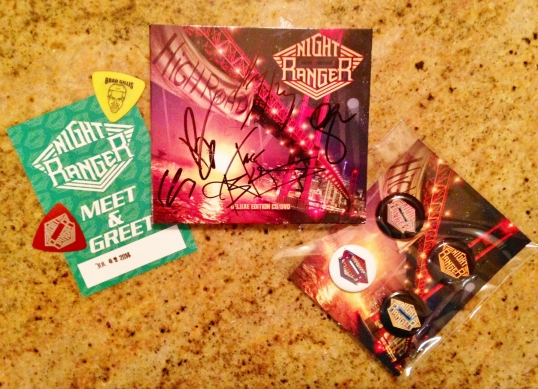 After meeting Night Ranger, Albert and I found a table and ordered food because we were both starving. One bacon cheeseburger later, I was feeling much better and ready for an amazing rock concert…and boy did I get one. Before Night Ranger took to the stage, I positioned by self in the standing-room-only area, right up front, so I could capture some great photos. The lights dimmed and Jack and the boys stepped out to a roaring ovation.

Night Ranger kicked of its set with “Touch of Madness” and then ripped into a new cut off of : “St. Bartholomew.” The rest of the concert was comprised of hits, including “Sing Me Away,” “Sentimental Street” and, my favorite, “When You Close Your Eyes.” The guys also performed the title track from and “Lay It On Me,” a great song from their 2011 album, There were also a couple deep cuts to satisfy the hardcore Night Ranger fans, and the show was capped off with two of the band’s biggest hits: “Sister Christian” and “(You Can Still) Rock In America.” 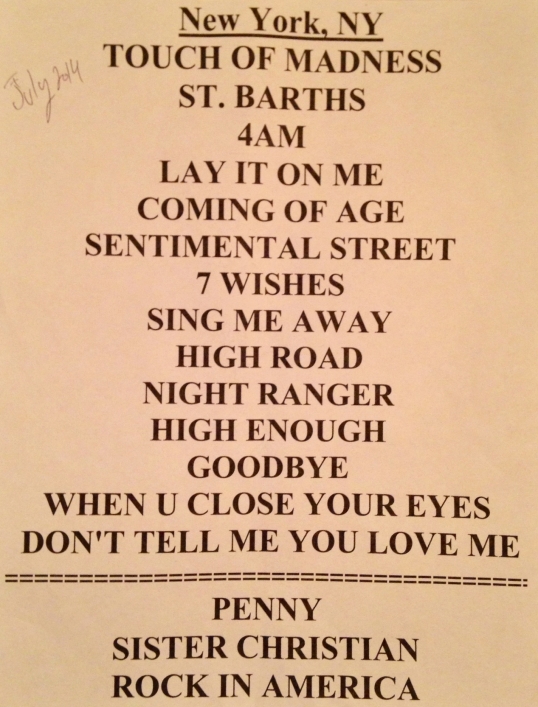 It took me a couple of hours to get to New York and a couple of hours to get back, but it was worth the trip. Night Ranger put on a phenomenal show that exceeded my expectations. I got hits, deep cuts and even a little Damn Yankees for good measure. I met the guys, got some swag and made a new friend along the way. It was a terrific experience, and I highly recommend you see Night Ranger when they come to your area. You won’t be disappointed.