A Conversation With Johnny Colla – Part 2 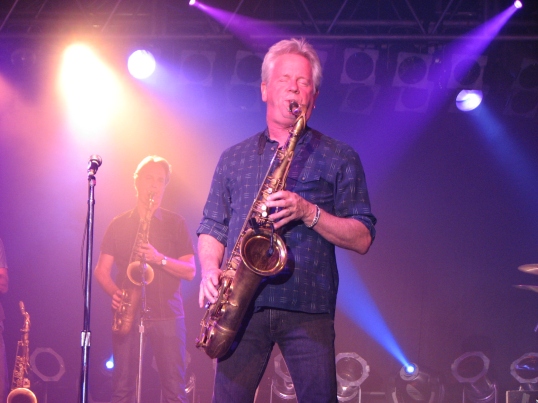 I recently had the pleasure of speaking with the incredibly talented Johnny Colla of Huey Lewis & The News. Our conversation covered his entire career, including his early days playing with Jack Blades in Rubicon to his time playing with Van Morrison and Sly and the Family Stone. And of course, we discussed his influential role as a founding member of Huey Lewis & The News, a band that has been making great music for nearly 40 years.

Follow Johnny Colla on Facebook, and make sure to check out his newest solo album:I Hear Voices. If you’re a fan of Huey Lewis & The News, you’ll love it.

Below is part two of my interview with Johnny. Part one can be read here.

Huey Lewis & The News has a terrific sound that’s modern and retro all at once.

Well, that’s Huey following all the blues cats when he was roaming around Europe with nothing but a harmonica and a couple bucks in his pocket. That’s Bill Gibson, who thrived on big band music when he was growing up. And Sean Hopper and I were heavily attracted to R&B and soul music.

For us it all started with WDIA radio out of Memphis and Stax Records, which was the first independent label to pump out this soul music with black and white folks singing in the studio together – no one knew that at the time, but that’s what was going on. And one of the only places to hear it was on WDIA.

WDIA had a sister-station out here in Oakland, California called KDIA, and KDIA was piping all the same music into the bay area that was going on in the south. In other words, if you couldn’t get WDIA outside of Memphis, you didn’t get any of that music anywhere else in the country, except the San Francisco Bay Area!

And when I was a kid sitting there with the AM radio dial going through all these radio stations, I stumbled on KDIA and – bam! – they’re pumping this music out that I don’t even know where it came from at the time. Nobody else knew about it except the kids that were hip and turned the radio dial to the right place. Another person who knew about it, to his credit, was Bill Graham, who was putting on great shows out at the Fillmore and bringing some of these acts to town.

So, if it weren’t for KDIA, we wouldn’t have had the soul influence that we did. That’s where it came from. None of us planned on being in a “rock” band. This whole soul, R&B, jazz thing came first. We dug soul music.

You guys are known for having beautiful harmonies that are layered throughout your songs. This creates a rich listening experience. Was this planned out ahead of time or did it come about organically?

I’m gonna take full credit for it (laughs). Honestly, it’s always been something I’ve been fascinated with, listening to backing singers on all the old 50s’ hits. Even when I had my first tape recorder as a kid, I used to layer vocals. I’ve been arranging the band’s BVs from day one.

Our first record, which was a new-wave effort, went virtually unnoticed. Punk with harmonies, for lack of a better phrase. We needed a hit bad on our second effort, “Picture This”. “Do You Believe In Love” came to us from Mutt Lange, whom Huey had met over in England, and it sounded like it had hit potential. Although Huey doesn’t get any songwriting credit, Mutt’s original demo was called “We Both Believe In Love” (laughs), so Huey re-wrote the lyrics to fit his personality.

For the signature backing vocals on that tune I had the idea of tracking myself, singing all eight parts, and it became our signature sound. It also sounded like a smash! At the time no one was doing it – except maybe Karen Carpenter! – and our manager said, “It has this unique sort of beauty and the beast quality.” My vocals where the beauty and Huey’s rough lead vocals where the beast (laughs). So to this day we call our blend “beauty and the beast.”

As things would happen, most everybody sang on subsequent tunes. But to get around that first hit, I multi-tracked what really became the hook of the tune.

Part of this thing, the a capella and the harmonies, started because in the early days, before our shows, we would hang around and talk about all of the soul and R&B bands we loved as kids and sing their songs backstage. Then before long we were taking artistic liberties and started inserting them into the show, and people loved them. And that’s how the a capella segment of our set came about, which still lives to this day.

You co-produced the terrific Huey Lewis & The News album Plan B. What’s it like producing the music you’re performing?

I’ve taken on more of a leadership role when it comes to production, probably because it’s something I always thought I could do. But that production credit did not come easily. It’s a lot like telling your big brother what to do, if you know what I mean. We are so close and have been together so long that the hardest thing to do isn’t for me to provide the guys with feedback and suggestions, the hardest part is for them to hear it (laughs).

When it comes to a production credit, a lot of it is nuts and bolts. Let’s face it: Huey’s the singer so he gets the last word. With a producer we’re looking for somebody who knows the band well and can guide the project. And I don’t think there’s anyone more suited for that than I am at this point in time. I don’t take the job lightly. I think I’ve gotten better at it over the years, and I’m honored that the guys let me do it. But having said all that, ‘director’ might be a better job description. Recording is still a team effort.

You released your first solo album, Lucky Devil, in 2000. What was it like going out on your own for the first time after having been in a hugely successful band for so many years?

I have an extremely diverse taste in music. Whether it be country music or soul music or classical music, I love it all. And I especially liked an emerging kind of music at the time called Americana. Although it never caught on the way people thought it was going to, it’s still alive and well today.

To be honest, I started that record around 1996 or 1997. Huey took a little vacation and worked on a solo project for a couple years. So, the first thing in my mind was that his hiatus gave me an opportunity to do the same thing. I started plugging away at it and about three quarters of the way through we decided we needed to get back on the Huey Lewis & The News track. That’s why there was a pause there and it didn’t come out for a while. But I always kind of had it in me. Americana might be my biggest love. I love a good story in a song and I tried to find stories in most of those tunes.

Your latest solo album is I Hear Voices, and several songs remind me of the music you created in Huey Lewis & The News. What was the experience like recording this album compared to Lucky Devil?

When I first set out to create this album, which is a nod to the songs that influenced me as a kid, I envisioned it as an a capella record. It was all about voices. The concept started out as purely a capella. So I had some of my buddies come in and lay down a little four-piece thing on each tune. Drums, bass, piano, and guitar. Something to sing to. Something to layer all of my favorite singers in the whole wide world on. But the tracks came out so well, I decided to switch gears and style it after those late 50s and early 60s records. A lot of room sound with vocals way out front – back when saxophone was king and guitar was just a rhythm instrument. That’s how that came about.

The last Huey Lewis & The News album, Soulsville, came out four years ago. Are you guys working on new material?

In fact, we are. We’ve got one in the can. However, who can listen to 12 songs in a row nowadays? People don’t seem to have the same attention span. It’s a singles world but you can’t get a single on the radio. So, we don’t know what we’re gonna do. We’re just gonna make songs we’re happy with and put them out in some manner, whether it’s three songs or six songs at a time. The plan is, we have no plan. We just know we enjoy playing together and being creative and that’s what we’re gonna keep on doing, doing it for ourselves.