This past Tuesday night John Waite kicked off his acoustic “Wooden Heart” tour in New Hope, PA and I was fortunate enough to be front row for the show. As with the three previous times I saw John live, this concert was excellent. However, it being an acoustic performance made for a much different atmosphere. This time around the performance was more intimate and the softer guitars placed John’s voice front and center, which is a good thing because the first time he sang a note it blew my mind how good he still sounds. The man is 63, yet his voice barely sounds any different than it did back in the 1980s. His tone is perfect and he emotes in a way few of his peers can. It’s really something to marvel. But I’m getting ahead of myself. Let’s start at the beginning.

The concert took place at Havana in New Hope, a terrific little venue that I’m going to be revisiting this Saturday when I go see Ace Frehley with my friend Chuck. Prior to the John Waite concert, I took part in a meet and greet with the man himself. Since I first interviewed John a couple years ago, I’ve had the opportunity to meet him backstage and see him live multiple times. He’s one of the nicest musicians I’ve met, so I was looking forward to seeing him again.

When I approached John he said to me, “Well, you look dapper.” I laughed, shook his hand and we caught up by talking about some musicians we both know. Then he asked me, “Would you like an autographed lyric sheet?” I said, “Absolutely!” and he signed a copy of a “Missing You” lyric sheet and gave it to me. We then took a photo together and I asked him the following:

What made you want to do an acoustic tour this year?

Well, we had some time to do it. The EP came out last year and we didn’t really have time to go out on the road and develop it properly – make a string of dates out of it. This year there was a six-week window to do it. We’ve got, I think, about 25 dates to do over the next two months.

Wow! That’s a lot of dates in a short period of time.

Yeah, it’s a lot. We didn’t expect the response we got. But it’s a more intimate thing. People go to a big concert and they sit in the back and they can wave at the artist if they like. This is more up-close and personal. It’s much smaller venues. Everything we’re doing is no more than 400 seats.

It’s interesting. I’ve spent a lot of time on the setlist. We’re trying to play obscure songs and songs that nobody’s ever heard before, and also throw in the singles, to make more of a statement. A lot of people enjoyed the albums and the singles are only one aspect of what you get.

Exactly, so you’re going to be playing some of the deep cuts. Are you also going to be telling the stories behind these songs?

Well, there’s going to be a coffee can out there so people can drop in questions. We’ll try and answer them as honestly as possible.

When’s your next acoustic EP coming out?

Well, if this goes well, it will be out in about four months. We’re also going to try and record some of these dates for a live unplugged album filled with more of the obscure cuts.

After interviewing John, I hung out and chatted with some fans including the biggest John Waite fan I know: Michelle. Before John’s show, Michelle and I took a photo together (see below) and talked about how excited we were for the acoustic performance. Afterward, we talked about all of the concert’s highlights and Michelle told me  – and John – that it was one of his best performances ever. There’s nothing better than when a great artist, like John, brings together fans and forms friendships.

Before John hit the stage, the opening act, Dan Godlin, came out to kick things off. I’m normally not a big fan of opening acts because I’m anxious to see the headliner, but Dan was exceptional. His voice was excellent and his songs were so catchy I made it a point to listen to his new album, Ambition, on my ride home. As a matter of fact, I’m listening to it right now as I write this sentence. He’s a terrific artist that you should check out.

As you can see from the setlist below, John Waite’s concert was dominated by obscure cuts, which I loved because I’ve seen him several times. However, he didn’t leave casual fans in the dark. He also performed some of the biggest hits from his days in The Babys, Bad English and as a solo artist. 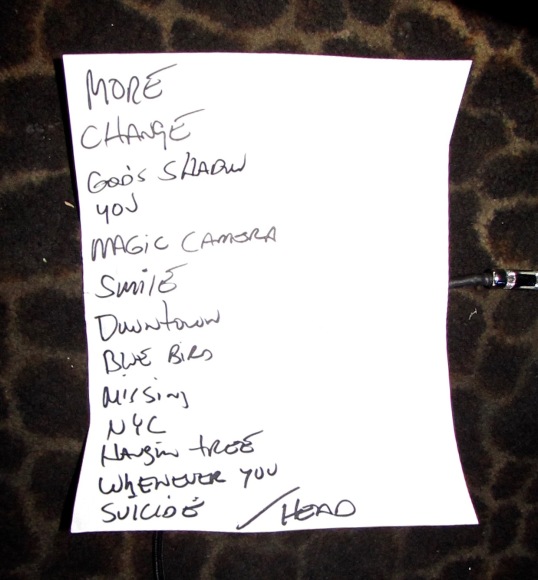 All of these songs were masterfully executed and a joy to hear. And several of them I had never heard before, including the following one entitled “You.”

One of the highlights for me was the Q&A portion where John answered one of my questions on stage and pointed right at me.

John also added one of the cuts from his new EP into the set: “Magic Camera.”

Being a huge fan of Bad English, I was thrilled when John and his band performed “When I See You Smile.” Acoustically, this song was made even more beautiful than the original.

No John Waite concert would be complete without “Missing You.” Everyone lit up when this song started and John received a thunderous ovation at its conclusion. It’s simply one of the greatest songs ever produced and as sonically potent as ever.

Toward the end of the set, John and his band tried out a song they didn’t rehearse: “Suicide Life.” While the song went off the rails a little bit toward the end, it was a pleasure to hear it live.

John closed out the set with “Head First” by The Babys. As you can see from the video below, it was the perfect way to end an excellent concert.

Make sure to visit John Waite’s website to see if he’s going to be in your area soon. John Waite is one of the greatest storytellers in music and his “Wooden Heart” acoustic tour is not to be missed.