What Do We Know? – ADAPT’s Free Our People March 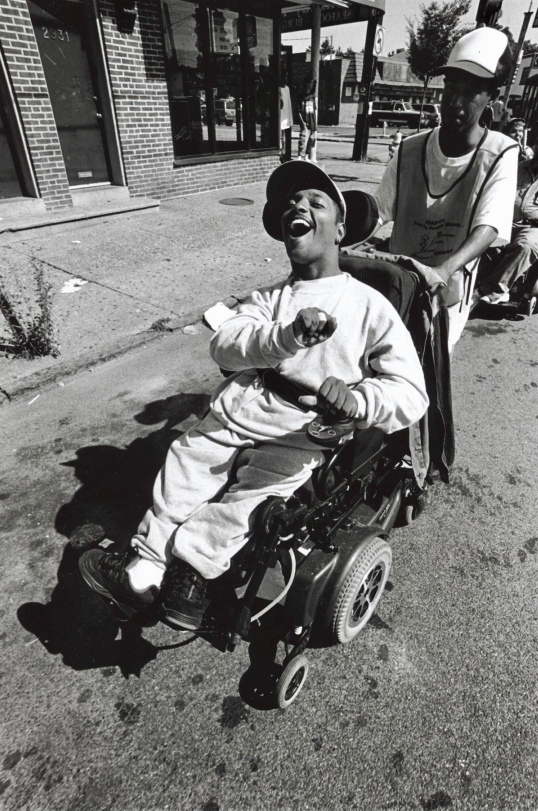 Almost every day last year I walked by this photo. It hung in the window of the old location of Liberty Resources on Market Street, here in Philadelphia. Liberty Resources, Inc. is a not-for-profit, consumer-controlled organization that advocates and promotes independent living for all persons with disabilities. As a Center for Independent Living, it advocates with disabled people, individually and collectively to ensure their civil rights and equal access to all aspects of life in the community. This photo always caught my attention when I’d walk by it, probably because of the joy on the man’s face in the wheelchair and his infectious smile. I’d stop and stare at it numerous times when I’d walk by, wondering what the story was behind the photo. Last week I decided to find out.

I figured out who the photographer of the photo was, Harvey Finkle, and I spoke with him. He filled me in on several details and directed me to Nancy Salandra, Director of Independent Living Services at Liberty Resources, for even more information. Here’s what I learned. The man in the photo is named Reuben. For 14 days in September 2003, representatives of the Disability Rights Movement, including Reuben, took part in a historic march. 200 people, many with significant disabilities, marched 144 miles from the Liberty Bell in Philadelphia to the steps of the U.S. Capitol in Washington, D.C. The marchers rolled on through rain, heat and cold, in an effort to raise awareness and to push through the passage of MICASSA (S971 and H.R. 2032). This march was organized by ADAPT, a grassroots disability organization with chapters throughout the country. ADAPT helped push through the ADA. Unfortunately, they weren’t able to get MICASSA passed. That said, the video below that they created of this monumental effort, and shared with members of Congress, drives home their message in a way that’s emotionally profound. They were kind enough to provide me with this video, and this is the first time it’s being shared publicly.

While MICASSA may not have come to pass, ADAPT is still forging ahead and garnering public attention, as you can see in the video below of a recent Rachel Maddow broadcast on MSNBC.

The photo of Reuben that captured my attention last year is emblematic of the joy a person can feel when he or she is making a difference. He, along with Liberty Resources and ADAPT, took part in a historic march to try and make a change. While they may have lost that battle, they’re winning the war. Year by year, they’re making life better for those with disabilities. They’re providing them with independence, pride and self-worth. I definitely think that’s something worth smiling about.