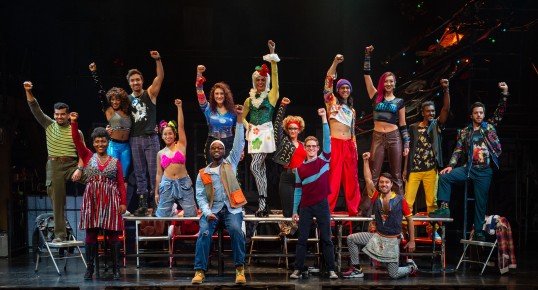 Following a sold-out March 2019 engagement, RENT is back by popular demand in Philadelphia to celebrate its 20th anniversary. I attended the opening night, and it was my first time seeing this show. The Pulitzer Prize and Tony Award-winning musical is taking place at the Merriam Theater October 18-20, and it’s absolutely worth seeing. RENT is an unconventional, frenetic show that gave me chills and made me cry, smile, and laugh multiple times. Unlike Hamilton, which I found to be underwhelming because of its grating music, shallow characters, and limp ending, RENT blew me away with its unique musical compositions, incredible cast, and emotionally moving story. Add to this a hot crowd full of people who had seen the show before and loved it, and I felt like I was at a rock concert more than a musical. This high-energy atmosphere made this excellent production even more enjoyable, and I now understand why people choose to see RENT more than once.

Despite it being non-traditional, RENT is one of the greatest musicals I’ve seen. It’s unfortunate that the show’s creator, Jonathan Larson passed away suddenly in 1996 on the date of RENT’s first preview performance Off-Broadway. If only he could see how what he created has impacted so many people, and how it’s just as relevant now as it was 20 years ago. Make sure to buy your tickets now so you can see this special musical before it’s too late.