Archive for the tag “Nelson DeMille”

Want to hear something strange? I met Nelson DeMille twice before reading one of his books. Seriously! I met him at a Harlan Coben book signing and then I met him at ThrillerFest last year, so I finally decided it was time to read one of his books – especially since I’ve heard such great things about them. The one I decided to start with was Plum Island.  END_OF_DOCUMENT_TOKEN_TO_BE_REPLACED

Earlier this month I attended ThrillerFest for the third year in a row. For those unfamiliar with the event, it’s hosted by International Thriller Writers, the premier organization for thriller writers, and it features an endless selection of panels, workshops and interviews for fans and writers to enjoy. END_OF_DOCUMENT_TOKEN_TO_BE_REPLACED 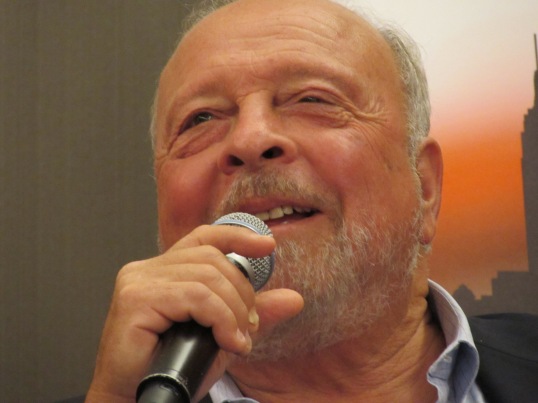 I just returned from New York City where I attended, for the third year in a row, ThrillerFest, the premier annual conference for mystery and thriller writers. This event, hosted by International Thriller Writers (ITW), is heaven for established writers, aspiring writers and fans of the genre. Attendees get to learn from and network with the best writers in the industry. It’s a fabulous environment that inspires everyone to take their reading and writing to the next level.

I captured a ton of great content during this amazing conference, and over the next several weeks and months I will share with you what I learned and experienced, including photos, videos, highlights from panels, and interviews.

END_OF_DOCUMENT_TOKEN_TO_BE_REPLACED

When I Met Lisa Scottoline

Lisa Scottoline and me (right) at Barnes & Noble on Rittenhouse Square in April 2012.

Lately, I’ve been attending book signings when I can. Within the past year, I’ve met Suze Orman, Donald Trump, Harlan Coben, and Lisa Scottoline. These events are fun, and I get to meet the minds – and in Trump’s case, the hair – behind the books. As a matter of fact, I plan on heading to New York in September to meet one of my new favorite authors, Lee Child.

Out of all of these encounters, Lisa Scottoline was definitely one of the most memorable. I had never read any of her novels, but I heard they took place in Philadelphia and that she used to be an attorney. Being a fan of mysteries and thrillers, I decided to take a chance and stroll over to the Barnes & Noble on Rittenhouse Square. It was a beautiful April afternoon, and I figured I could do worse things with my lunch break. To my surprise, Lisa was far different than I expected.

She showed up in a dress suit with Crocs on because, according to her, she “just had foot surgery.” Already I knew she wasn’t going to be one to hold back. Lisa went on to talk about her relationship with her mother and how her new book, Come Home, which dealt with parenting issues, specifically when it came to stepchildren from a previous marriage. After speaking for several minutes she said, “OK. I’m going to shut up soon, so you can line up and get your books signed. I know many of you have to get back to work.” Then she pointed at me and said, “But you. I want you at the front of the line. You’re gorgeous!” While I was flattered to receive the compliment, I blushed so much I must have looked like a Red Delicious apple at that moment.

Besides her brutal honesty and friendly demeanor, I quickly learned that Lisa likes to give Tastykakes to her fans. Every time someone asked a good question, she gave the person a Tastykake. Having recently met Harlan Coben, I asked Lisa, “Harlan Coben mentioned that he regularly gets together for dinner with a group of author friends, including Lee Child, Nelson DeMille and Mary Higgins Clark. Do you also regularly socialize with fellow authors?” Lisa responded by saying, “I’m also friends with Harlan Coben, but I haven’t been invited to any of those dinners. Next time you see him, let him know.” For a moment, I was mortified, thinking I’d upset her. But then she laughed and I realized she was just playing around.

After the Q&A, we all lined up to get our books signed and meet Lisa. When I got to the front, I told her this was the first book of hers that I was going to read and that, like her, I was Italian. In typical Lisa fashion, she replied, “You’re Italian? But your nose is so perfect. Me, I’ve got this big thing to work with.” I couldn’t do anything but laugh. It was the last thing I imagined she would say, but with Lisa Scottoline unpredictably is to be expected. I then asked to take a photo with her, and, of course, she said yes. As I turned to leave, she gave me a box filled with three Tastykakes.

After stepping to the side to gather my things, I watched her engage in conversation with fans and noticed how she remembered those that came to previous signings. She greeted them with hugs and kisses and asked about their friends, who she also previously met. What impressed me even more was, as I left, Lisa stopped talking to a fan to say, “Thanks for coming Michael. I appreciate it.” This blew me away. I met the woman for a brief moment and after speaking with several fans, she remembered my name and was gracious enough to thank me for coming out. Many celebrities, like Donald Trump, are as egotistical as you’d imagine. But I can’t say enough positive things about Lisa Scottoline. She was entertaining, warm and appreciative. I look forward to attending her future signings, and her book was entertaining as well.