Michael Des Barres Is The Key To The Universe 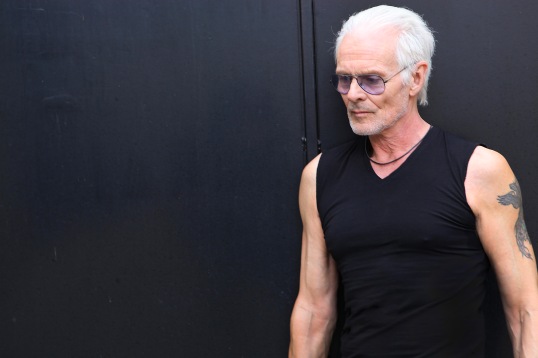 Any time I get to talk to the wonderful Michael Des Barres, it’s always a treat. He’s an incredibly talented artist brimming with charisma and bursting with positivity. While some may know him as Murdoc from MacGyver, I know him best for his impressive body of work as a musical artist. Speaking of which, Michael has a new album out called The Key to the Universe. It’s an excellent follow-up to his last studio album, the equally fabulous Carnaby Street. If you enjoy balls-to-the-wall classic rock, then I highly recommend both of these albums.

Michael took the time to sit down with me and discuss The Key to the Universe. We covered everything from his recording the album in Rome to writing one of the tracks with guitar virtuoso Steve Stevens. It was a fun interview and I hope you enjoy it.

Thanks for taking the time to speak with me, Michael. How are you doing?

I feel amazing. (laughs) I feel like I’m 18. But I’m 18 with a library of knowledge. (laughs) So, I feel naive and experienced.

Your new album is called the The Key to the Universe. What was the inspiration for the record’s title?

The thing about this album is it’s about obsessive love, vulnerable love and compassion. That’s what we require to exist as a species. If we don’t embrace the community around us, our friends and family, we are doomed to the apocalypse. Now, I will be in the apocalypse playing. I will be the house band of the apocalypse and I’ll be standing next to Iggy and we’ll still be rocking. But the issue here is, what is the key to the universe? And the answer is you. The universe doesn’t exist without you, and you don’t exist without the universe. You are as vast in your soul as the universe is in space. If you can think of it in those terms, you have a certain responsibility to your immediate surroundings.

You recorded The Key to the Universe in Rome. How did being surrounded by that wonderful culture influence the music that resulted from your recording session?

That’s a very perceptive question, Michael, because recording in Rome inspired a certain spontaneity and it raised the stakes because of the beauty and timelessness of the city itself.

Whenever you’re taken out of somewhere that’s comfortable, you’re always looking over your shoulder and your senses are heightened. But to be in Rome was extraordinary because it’s such a timeless and inspiring city of culture and civilization. I felt honored, and I felt that I was doing something new.

We were in a massive studio and it had a majesty to it. (laughs) Just a beautiful environment.

I noticed that this album has a distinctly different sound than Carnaby Street, and I think it’s great. What kind of sound were you setting out to achieve when you started recording this record?

Really good ones. (laughs) Carnaby Street was a live album; I did the vocals once. This was a real production. Here, I spent two weeks, which for me is a very long time.

I wanted to make a record that provided an overview and sonically sounded as best as it possibly could. And by best I mean authentic. It was recorded analog because that’s my music, analog, as you know. If anybody knows, you know. That’s the kind of music I make. It should be made for vinyl, and it is made for vinyl and doesn’t have compression.

What was it like playing with Nigel Harrison, your old bandmate from Silverhead, on this album?

Amazing! It was like we were teenagers. We did that Silverhead reunion in Tokyo and it was so fun that we jumped at the opportunity to do this, and here we are.

Of course, if you’ve looked at any charts lately, we’re all over the radio. It’s just shocking how quickly it’s taken off.

There are a lot of great songs on this album. And even though it’s highly diverse in musical styles, it still has a cohesive feel to it.

Thank you, Michael. It’s so interesting. Different countries have responded to different songs, and that’s a good thing. There’s a lot of different material there. That record is diverse, and it shows the experience of the people that are playing on it. There are stories to be told and colors to be used, but on the same canvas.

You wrote “Maybe Means Nothing” with the incredibly talented Steve Stevens. What was that experience like?

Staggering. The guy’s a brilliant guitar player. What I took away from that was his love for the instrument. This guy changes his own strings, polishes his guitars, treats them like lovers. Steve Stevens is a unique and extraordinary guitar player and human being. He has a beautiful wife, and his house is like an homage to rock and roll. He lives and breathes music.

Do you plan to tour soon to support this album?

We totally will play. We can’t wait. There’s a lot of excitement about the live touring situation. You know me, Michael. That’s where I live. That microphone and that audience. That’s what I want more than anything. The idea is to start in Europe, London, and then come back to the States.