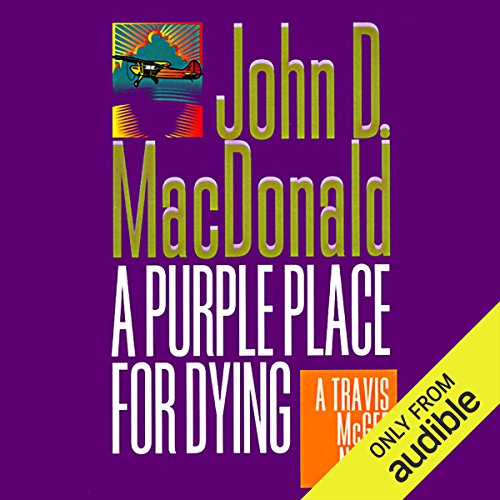 The Travis McGee novels by John D. MacDonald inspired numerous thriller and mystery writers, so I thought it would be a great idea to check out these books for myself. The audiobooks for the Travis McGee series are exclusive to Audible, and I recently completed the third book: A Purple Place For Dying. Each book includes a color in the title, making for unique and interesting names. As with the previous two entries, this novel was highly enjoyable.

The Travis McGee novels span 20 years, with the first coming out in 1964 and the last in 1984. It’s impressive to think that the first four came out in 1964. What I enjoy about them is how they are reflective of their era, including thoughts, concepts, and references that are dated but in a charming way. For example, in A Purple Place For Dying Travis talks about sunscreen as a new scientific development, which made me laugh out loud while listening to it.

Unlike the books this series inspired, so far, the Travis McGee novels are straightforward and easy to follow. Modern thrillers and mysteries often contain so many subplots and twists that you need to take notes just to connect the dots. It’s refreshing to read a series of books that aren’t convoluted. Instead, they focus on a compelling character and toss him into interesting situations. It’s clear to me how Lee Child’s Jack Reacher and Stuart Woods’ Stone Barrington were influenced by Travis McGee.

A Purple Place For Dying was a great listen as it has a solid story and a terrific narrator. I highly recommend it to those that enjoy thrillers and mysteries, and I look forward to the next installment in this fabled series.

2 thoughts on “Audible Review: A Purple Place For Dying”