One Fearful Yellow Eye, which is a strange title for a book, is about extortion. To be more specific, it’s about extorting $600,000 from a dying man. The victim of this extortion is the husband of Travis McGee’s ex-girlfriend. Set in Chicago, this mystery is a nice change of pace for the series.

END_OF_DOCUMENT_TOKEN_TO_BE_REPLACED

The seventh book in the Travis McGee series, Darker Than Amber is another solid, straight-forward mystery from John D. MacDonald. According to the description, “Travis McGee never shies away from damsels in distress. But this Eurasian beauty was different. When Travis and Meyer rescued her from the water, she had a block of cement wired to her feet, and she wasn’t so much grateful as ready to snare them in a murder racket to end all murders.” Published in 1966, this novel is still an enjoyable read, especially the Audible Original version.

END_OF_DOCUMENT_TOKEN_TO_BE_REPLACED

A Deadly Shade of Gold is the fifth book in the Travis McGee series. In this entry, McGee picks up the phone and hears a voice from the past, he can’t help it. He has to meddle. Especially when he has the chance to reunite Sam Taggart, a reckless, restless man like himself, with the woman who’s still waiting for him. But what begins as a simple matchmaking scheme soon becomes a bloody chase that takes McGee to Mexico, a beautiful country — and one from which he hopes to return alive. John D. MacDonald has really gotten the hang of writing for this character, and it shows. The dialogue is entertaining, and there are action-packed events throughout this Audible Original.

END_OF_DOCUMENT_TOKEN_TO_BE_REPLACED

Released in 1964, Nightmare in Pink is the second book in John D. MacDonald’s Travis McGee series. In this entry, Nina — a career girl living alone in Manhattan — offers the protagonist companionship and the first loose thread in the elaborate fabric of a gigantic swindle. She leads McGee on a wild and tortuous chase into the decadent world of high society, the ruthless world of big money, and the weird world of hallucinatory drugs.

END_OF_DOCUMENT_TOKEN_TO_BE_REPLACED

For 20 years ⁠— from 1964 through 1984 ⁠— the Travis McGee novels by John D. MacDonald were a mainstay in the mystery genre. With each of the 21 titles including a color in their name, this was one of the first examples of books in a series having a theme. Living on a houseboat called The Busted Flush, which he won in a card game, the protagonist, McGee ⁠— who is neither a cop nor an investigator ⁠— is a “salvage consultant” for hire, regularly finding himself in a variety of mysterious predicaments. The first novel in the series, which had a major influence on Lee Child — the author of the best-selling Jack Reacher series — explains how McGee only works when his cash runs out, and his rule is simple: he’ll help you find whatever was taken from you, as long as he can keep half.

END_OF_DOCUMENT_TOKEN_TO_BE_REPLACED 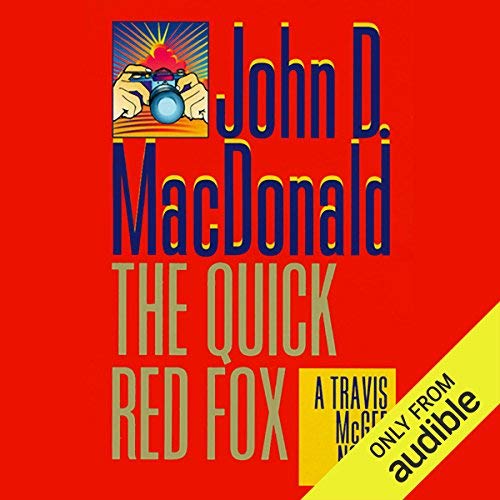 The Quick Red Fox is the fourth book in the Travis McGee series and it’s the first one that I didn’t care for, which surprised me. While this audiobook is well narrated and that McGee charm is pervasive, the story itself is incredibly slow. It takes forever for something meaningful to happen and there are a significant amount of inner-dialogue moments, which slow down the story even further. It’s a shame because I wanted to like this audiobook much more than I did. That said, I still look forward to future entries in the series.

The Travis McGee novels by John D. MacDonald inspired numerous thriller and mystery writers, so I thought it would be a great idea to check out these books for myself. The audiobooks for the Travis McGee series are exclusive to Audible, and I recently completed the third book: A Purple Place For Dying. Each book includes a color in the title, making for unique and interesting names. As with the previous two entries, this novel was highly enjoyable.