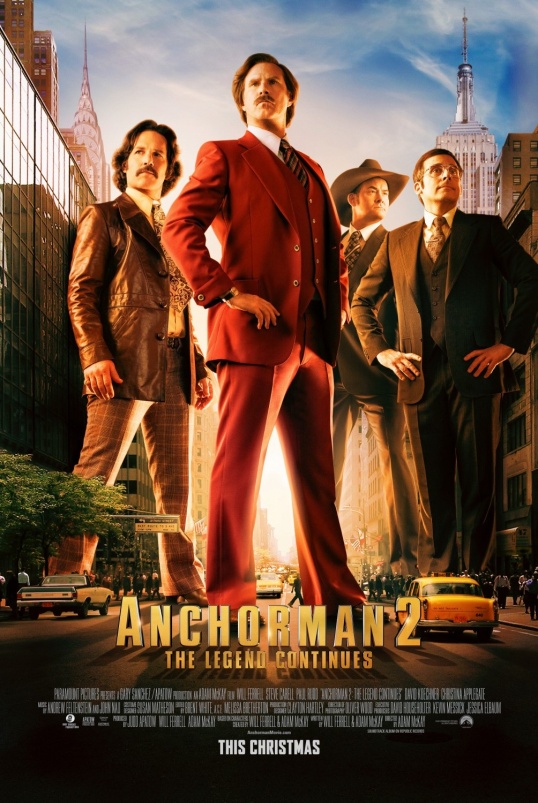 Anchorman 2: The Legend Continues, the sequel to the 2004 comedy Anchorman: The Legend of Ron Burgundy, opened this weekend following what I consider to be one of the most creative advertising campaigns ever for a feature film. The question is, does this sequel live up to the hype? Read on my curious friend.

Unlike the first film, which was set in the 1970s, Anchorman 2 takes place in the 1980s – my favorite decade! Despite the questionable fashion choices in this decade of decadence, the music, movies and TV shows were awesome. Speaking of which, Anchorman 2 has a killer soundtrack. You’ll find everything from John Waite’s “Change” to Neil Diamond’s “Shilo” to “Every 1’s a Winner” by Hot Chocolate. And the obligatory Kenny Loggins’ track is on here too – the terrific “This Is It” featuring backing vocals by Michael McDonald. It’s a feast for the ears that compliments the movie’s visuals perfectly.

While the classic one-liners from Anchorman: The Legend of Ron Burgundy are a tough act to follow, Anchorman 2 does its best to deliver the goods. As a fan of the first film and Will Ferrell, I’m glad to report that the majority of this movie delivers the goods. However, it does drag on longer than it should and it felt as though the plot lacked focus toward the end.

The bottom line is this – if you didn’t see the first movie or don’t like Will Ferrell’s brand of humor, don’t bother seeing Anchorman 2. On the other hand, if you love the first film and can’t get enough of Will Ferrell, give this one a shot. It’s not as good as the first, but it features excellent music, solid performances across the board, countless cameos by Hollywood A-listers, and, most importantly, gut-wrenchingly funny moments.