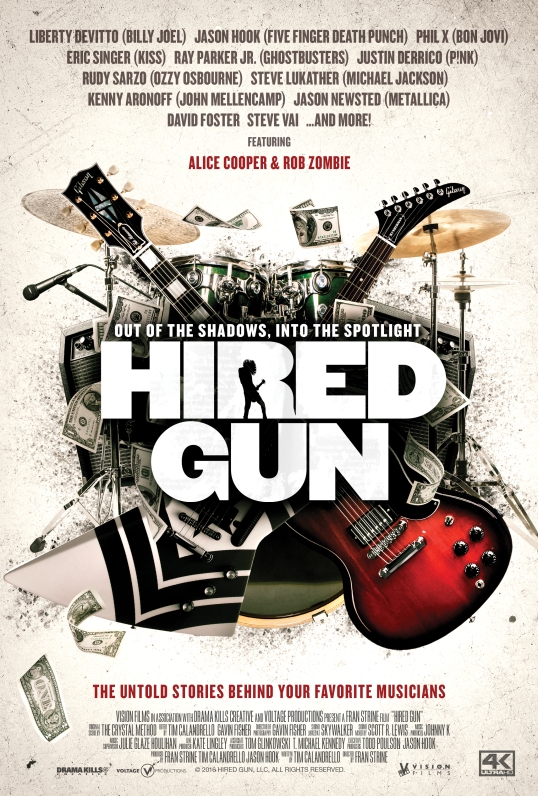 Yesterday I watched a fantastic film: Hired Gun. This feature-length documentary has been screened to both critic and audience acclaim at SXSW Festival, Glastonbury Festival, MIFF, Calgary International, and Noise Pop. There was also a special one-night screening of the movie in theaters across the country on June 29. It introduces music fans to some of the world’s unsung heroes of the music industry through exclusive interviews and performances. These artists have played with a variety of music legends, including KISS, Alice Cooper, Rob Zombie, Billy Joel, P!NK, Ozzy Osbourne, Michael Jackson, Metallica, Bon Jovi, and many more.

I asked the director of Hired Gun, Fran Strine, a few questions about it. Here’s what he had to say:

What was the inspiration for this film?

I was inspired by Behind the Music back in the day, but it only revealed a small taste of the train wreck. But if you’re like me you want to see the train wreck and the body hanging out of the window and get the full juicy details. For me its all about the human factor and these musicians’ inner lives. Its really fascinating, sad, funny, happy, and full of fantastic music. I loved to be moved by a film and really get lost in the 90 mins so it was important to me to make a film that delivered all these emotions. I’ve seen the film dozens of times and I still tear up at a few segments right where I had hoped I would.

How long did it take to create?

Hired Gun took almost 3+ years from beginning to end. The core team was myself as director, producer and writer. Gavin Fisher who acted as director of photography, editor and colorist. The three of us conducted all the interviews you see in the film and really had the best time ever! Other core team members were our outstanding executive producer, Todd Poulson who never questioned any decision I made and made sure my needs where met to be able to focus on delivering the best film I could. Jason Hook was also a EP on the film and really was in the background and just wanted me to deliver a great music doc. I think he was on set a total of two days but was instrumental in helping me get some great interview subjects. The most important post team I had was our music supervisor and archivist producer. Julie Glaze Houlihan had a giant task of clearing some huge timeless music that worked within our budget, the same with Kate Lingley!

How may musicians were interviewed for the movie?

We interview roughly 55 musicians and several producers. We have so much material that is jaw dropping that didn’t make the cut because then the film would have been 500 hours long! LOL!

Will it be released digitally (iTunes, Amazon, etc.) and physically (Blu-ray, DVD, etc.) in the future? If so, approximately when?

It be on these platforms soon with an announcement coming soon.

Hired Gun is the story of the musical talent responsible for the most famous instrumental solos in the world, who have toured with the music legends who hired them. The hired gun community lives and breathes music, and, for the first time, its members share their incredible stories and exclusive musical performances with the world in this inspiring new documentary. I learned a lot watching this documentary and it was compelling to watch from start to finish. Keep your eyes and ears open for news about its commercial release, as it’s absolutely worth checking out.