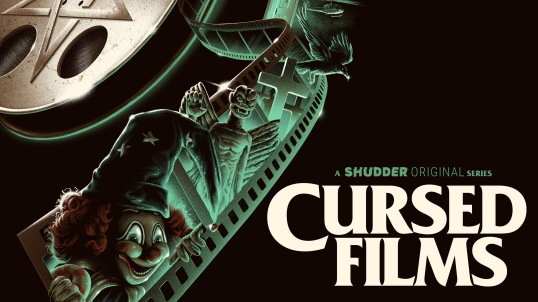 A Shudder original, Cursed Films is a five-part documentary series which explores the myths and legends behind some of Hollywood’s notoriously “cursed” horror film productions. From plane accidents and bombings during the making of The Omen, to the rumored use of real human skeletons on the set of Poltergeist, these stories are legendary amongst film fans and filmmakers alike. But where does the truth lie?

Cursed Films reveals the real-life events that haunted these productions through interviews with experts, witnesses and the cast, directors and producers who lived through them. Were these films really cursed, as many believe, or just the victims of bad luck and bizarre circumstances?

Below is a list of the episodes in this Shudder original series, when they air, and some background on each one.

I watched two episodes of Cursed Films and it’s an interesting and informative series. While I don’t believe any artistic endeavor is truly cursed, it’s still fun to go along for the ride and hear about all of the crazy stories associated with these movies. I watched episodes about Poltergeist and The Omen, and I was fascinated by how there was commentary from those who felt these projects were cursed and those who thought that anything that went wrong was an unfortunate coincidence. Which side is right? Tune in on April 2 to watch the first episode of Cursed Films and decide for yourself.