I love Audible and audiobooks! Every day I’m listening to a new chapter in an audiobook using my Audible app, as it’s a great way to be productive while doing chores around the house. Audible also comes in handy while taking a walk, driving, or when you simply want to wind down at the end of the day. You can even get your morning off on the right foot by listening to a newspaper, such as The Wall Street Journal, with Audible. The options are endless, and with the newly launched Audible Plus and Audible Premium Plus service Audible has gotten even better. 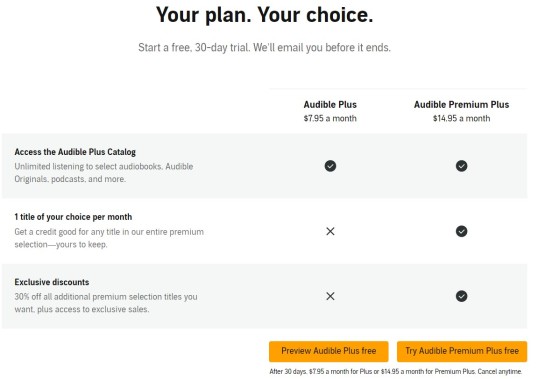 Extensive Content Portfolio across Genres, Lengths and Formats Available for $7.95 per Month

NEWARK, NJ – August 24, 2020 – Audible Inc., the world’s largest producer and provider of original spoken-word entertainment and audiobooks, today announced the preview phase of an emerging offering, Audible Plus. A brand-new all-you-can-listen service, Audible Plus will provide access to an array of Audible Originals, audiobooks and podcasts that span genres, lengths and formats. Offering members greater selection through unlimited access to a robust catalog, Audible Plus includes over 68,000 hours of content and 11,000+ titles from across the content spectrum, including documentaries, comedy, journalism, kids, wellness, self-development, selections from Audible Theater and more. New Audible Originals come from a wide range of talent including Common, St. Vincent, Blake Griffin, Jesse Eisenberg, Tom Morello, Kevin Bacon, David Koepp, Jamie Lee Curtis, Kate Mara, Tayari Jones and Harvey Fierstein, among many other celebrated creators and performers. Audible Plus begins its initial rollout this week.  The content slate will continue to grow expansively alongside various technical enhancements over the coming months.

“Audible’s commitment to innovation in storytelling is part of our DNA. With Audible Plus, we’ve designed a stellar complimentary offering for existing members and an exciting entry point for new customers that elevates our service in a meaningful way,” said Audible CEO Bob Carrigan. “As we accelerate our expansion in the premium audio storytelling and entertainment space, we believe this collection of extraordinary voices will inspire millions of customers.”

“We have an extremely active development, production and acquisition pipeline and look forward to the imminent and ongoing growth of Audible Plus as the source for more and more extraordinary entertainment and value for our customers,” said Rachel Ghiazza, Audible EVP and Head of US Content. “Audible is focused on the future as we continue to both develop our customer offerings as well as ramp up our collaborations with outstanding talent who create unparalleled content for our global audience to enjoy.”

Audible Plus programming can be streamed instantly or downloaded for offline listening. In addition to the Audible app, the Audible Plus catalog will also be available across Alexa-enabled devices and Amazon Fire tablets.

The Audible Plus catalog will be available to Audible Premium Plus members beginning today. New customers interested in signing up to preview the Audible Plus standalone plan will be able to do so beginning on August 27th.

Select recent, new and upcoming Audible Original titles available in the Audible Plus catalog include: