Archive for the tag “Tom Cruise”

Last night my wife and I were looking for a movie to watch. I went on to Amazon Prime Video and searched through the popular movies that are currently included with a Prime membership, and I came across Vanilla Sky. Released in 2001, this is a movie I’ve always been aware of but knew nothing about. After watching part of the trailer, we both agreed that it was worth giving a go. Read on for my thoughts on Vanilla Sky.

END_OF_DOCUMENT_TOKEN_TO_BE_REPLACED

Lee Child is the #1 international best-selling author of the Jack Reacher series, for which he’s won the Anthony, Barry and Nero awards. In addition to writing worldwide best-sellers, Child currently serves as the Co-President of International Thriller Writers – a terrific professional association that anyone interested in working in the thriller genre should join.

Child’s newest novel, Personal, just came out this week in the U.S. and is already a #1 best-seller in the U.K. It’s the 19th Jack Reacher novel and is receiving rave reviews from fans and critics alike. Lee took the time to speak with me about his illustrious career, the creative process and his belief that nothing of value is ever achieved in the morning. Enjoy!

END_OF_DOCUMENT_TOKEN_TO_BE_REPLACED

I woke up to great news this morning – the 2012 film, Jack Reacher, which was based on Lee Child’s bestselling novel, One Shot, and starred Tom Cruise in the title role, is getting a sequel. It was just announced that Child’s newest international bestseller, Never Go Back, will be adapted for the film and Tom Cruise is returning as Jack Reacher. As of right now, Cruise and company are trying to get the original film’s Director, Christopher McQuarrie, back at the helm for the sequel, but he has yet to confirm whether or not he’ll be part of the project.

To me, this is excellent news. I know many obstinate fans of the novels will continue to lambaste Cruise for being Jack Reacher because he physically doesn’t “measure up.” But people need to get over this fact because Tom Cruise was excellent in the first film and, whether they like it or not, a sequel is being made. If it’s anything like its predecessor, we’re in for a real treat. 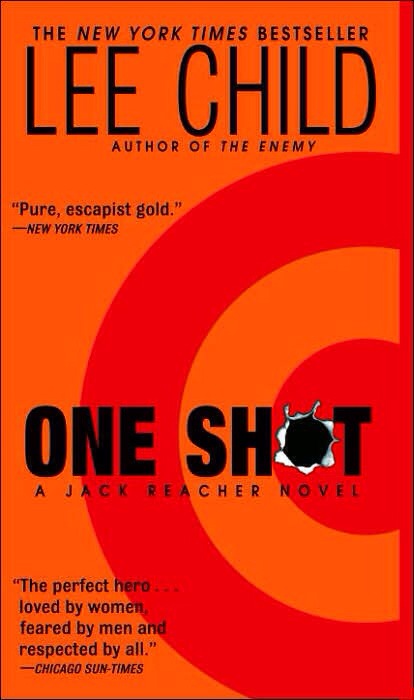 One Shot by Lee Child is the ninth Jack Reacher novel and the inspiration for the 2012 film, Jack Reacher, starring Tom Cruise. Like the movie, One Shot focuses on a violent crime and whether or not the man being accused of it is actually the perpetrator. As with the previous books in the series, Child does a fantastic job with developing the protagonist and having him intelligently overcome the odds. And, as always, I opted for the audiobook version of the book because of Dick Hill’s spectacular narration – he is the voice of Reacher. If you’re a fan of the series or a newcomer, this is a great thriller and, quite possibly, the best Jack Reacher novel up to this point. I highly recommend it.

Six shots. Five dead. One heartland city thrown into a state of terror. But within hours the cops have it solved: a slam-dunk case. Except for one thing. The accused man says: You got the wrong guy. Then he says: Get Reacher for me.

And sure enough, ex–military investigator Jack Reacher is coming. He knows this shooter—a trained military sniper who never should have missed a shot. Reacher is certain something is not right—and soon the slam-dunk case explodes.

Now Reacher is teamed with a beautiful young defense lawyer, moving closer to the unseen enemy who is pulling the strings. Reacher knows that no two opponents are created equal. This one has come to the heartland from his own kind of hell. And Reacher knows that the only way to take him down is to match his ruthlessness and cunning—and then beat him shot for shot. 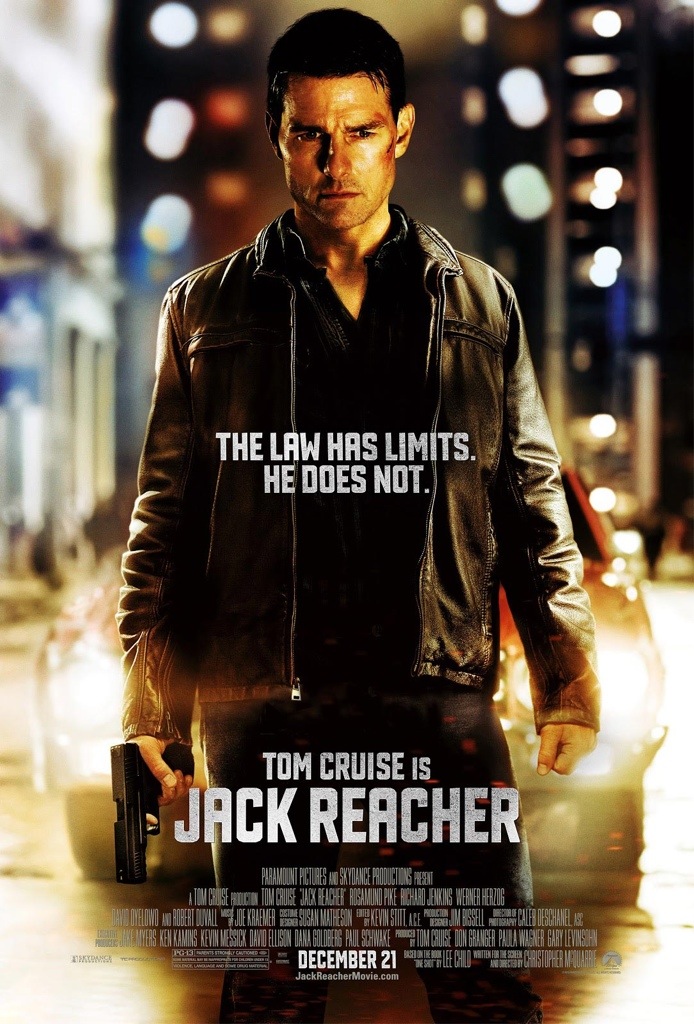 Lee Child is one of my favorite authors, so when I heard a movie was coming out based on one of his books, One Shot, I knew I had to see it. The film is called Jack Reacher and it stars Tom Cruise in the lead role. As I mentioned in the past, many fans of the Jack Reacher novels doubted that Cruise could pull it off. However, I’m glad to report that he was exceptional in this role. Not only did I find myself believing that he was Jack Reacher, but Cruise was incredibly charming on screen too. The supporting cast did a fine job as well, especially Robert Duvall, who injected some humor into the serious plot.

Speaking of the plot, I have yet to read One Shot, so I can’t say how the film compares to the book. But I can say that it was an intriguing tale, even though certain “twists” were predictable. What made the film even more enjoyable was the cinematography and score; both were beautifully done and kept me engaged from start to finish.

Whether or not you’ve read Lee Child’s engrossing novels I highly recommend you see Jack Reacher. It’s an entertaining movie filled with action, humor and drama that is sure to please almost anyone.

Below you’ll find the official film synopsis and two clips.

Six shots. Five dead. One heartland city thrown into a state of terror. But within hours the cops have it solved: a slam-dunk case. Except for one thing. The accused man says: You got the wrong guy. Then he says: Get Reacher for me. And sure enough, ex-military investigator Jack Reacher is coming. He knows this shooter-a trained military sniper who never should have missed a shot. Reacher is certain something is not right-and soon the slam-dunk case explodes. Now Reacher is teamed with a beautiful young defense lawyer, moving closer to the unseen enemy who is pulling the strings. Reacher knows that no two opponents are created equal. This one has come to the heartland from his own kind of hell. And Reacher knows that the only way to take him down is to match his ruthlessness and cunning-and then beat him shot for shot.

At age 40 Lee Child wrote his first book: Killing Floor. It went on to win an Anthony Award for “Best First Novel” and kicked off the best-selling Jack Reacher series.

Below are two short-and-sweet interviews with Child. One is about writing and the other is about Reacher. Enjoy!

Today, the full theatrical trailer was released for Jack Reacher starring Tom Cruise. I think it’s superior to the initial trailer because it provides additional plot details and gives the viewer a greater understanding of who Jack Reacher is and what motivates him. While Cruise may not physically resemble the Jack Reacher I envision when reading Lee Child’s captivating thrillers, I’m willing to give him the benefit of the doubt. After watching the trailer below, feel free to share your thoughts on whether or not you plan on seeing Jack Reacher.

Lee Child’s 17th Jack Reacher novel, A Wanted Man, was released in various countries around the world today, and it’s coming out in the U.S. on September 11. I’ll be in New York the day it’s released to meet Lee Child and hear him talk about his new book. Speaking of which, below is a taste of what’s in store for Jack Reacher.

Official Description:
When you’re as big and rough as Jack Reacher and you have a badly-set, freshly-busted nose, patched with silver duct tape it isn’t easy to hitch a ride. But Reacher has some unfinished business in Virginia thanks to the intriguing voice of a woman he’s only met via phone, so he doesn’t quit. He’s picked up by three strangers, two men and one woman. But within minutes it becomes clear they’re all lying—about everything—and then they run into a police roadblock on the highway. There has been an incident, and the cops are looking for the bad guys.

Is Reacher just a decoy?

Can Tom Cruise Be Jack Reacher? 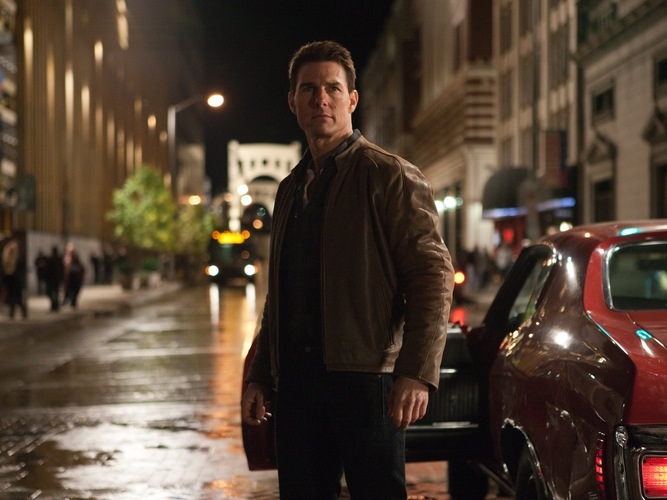 This past year I started reading Lee Child’s Jack Reacher novels for the first time. I’ve only completed two so far, Killing Floor and Die Trying, but I can already see why readers have fallen in love with the Jack Reacher character. He’s a no-nonsense kind of guy that regularly gets himself, and others, out of difficult situations by calling on his military experience, brute strength and intellect.

This series started in 1997 and has grown to 16 books since then, with the 17th, A Wanted Man, being released in September. It’s become so popular that Jack Reacher will soon be appearing on the silver screen in a major, Hollywood film appropriately titled Jack Reacher.

However, the release of this film has caused an uproar among “Reacher’s Creatures” because Tom Cruise is slated to play Jack Reacher. For those of you that don’t know, Jack Reacher is 6′ 5″ tall, between 210 and 250 pounds and has dirty blond hair. Tom Cruise, on the other hand, isn’t nearly as tall, heavy or blond. Needless to say, many of Lee Child’s faithful readers are upset.

Do you think Tom Cruise can pull off being Reacher? Check out the trailer below and cast your vote in the poll to let me know.