Monster-Mania 30: A Nightmare Worth Living 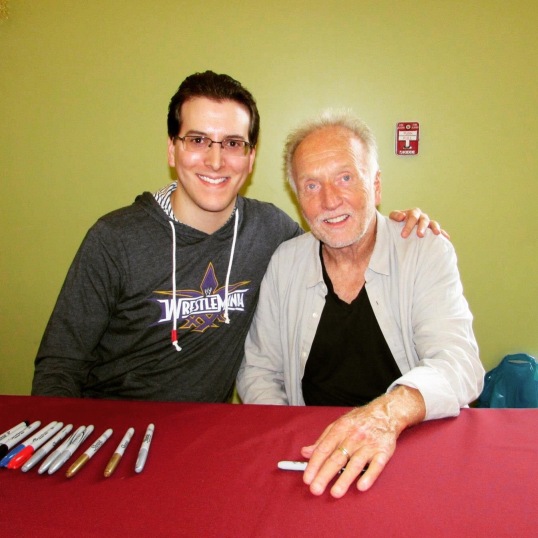 Last Saturday I attended Monster-Mania. This biannual event features notable actors and actresses from the horror, action, comedy, and science fiction genres, as well as professional wrestlers. For the thousands that attend, this is an opportunity to meet their idols, get autographs, participate in photo-ops, watch Q&A panels, browse through aisles of cool merchandise, and enjoy hours upon hours of movies.

The big draw for Monster-Mania 30 was Tobin Bell, otherwise known as “The Jigsaw Killer” from the Saw horror franchise. I waited in line to meet Tobin and while it took some time to get to the front, it was worth the wait. He was very nice, we chatted for a couple minutes, and he even put a movie quote (“Game Over!) on my Saw Blu-Ray collection – something he didn’t do for other fans because of time constraints.

Meeting C.J. Patton, author of The Cutting Edge: Philosophy of the Saw Films.

While waiting in line to meet Tobin Bell, I met C.J. Patton, a local author who wrote The Cutting Edge: Philosophy of the Saw Films. I bought a copy of the book from her while at Monster-Mania; it’s also available to purchase on Amazon. Since we had time to kill while waiting to meet Tobin and I found her book to be interesting, I interviewed C.J.

When did you see the first Saw movie. Was it in theaters or after it came out on DVD?

It’s actually a little complicated. I saw the third one first, in theaters, and I was totally fascinated by it. So, I went back and watched the first two. Then I saw all the next ones at midnight in the theaters because I was in love with the series.

When you saw the third movie, where you confused about what was going on or did the flashbacks fill you in on everything you needed to know?

Not really. I got the general plot. That he was trying to teach about not seeking revenge. And that whole thing was really cool. I had never seen anything like it before. So, I was totally fascinated by it.

Had you already realized that you were into philosophy at that point?

I had taken one high school philosophy class and I thought it was pretty cool but I didn’t really know that I was going to end up majoring in it in college. That came much later. I think I started off college as an education major.

When you first watched Saw, did you instantly see the deeper meaning behind it?

That’s what stood out to me more than anything else. I thought to myself, wow, this guy is really crazy, but he’s also really smart. I thought that was really cool because I had never seen a horror movie have such an interesting bad guy before. So, immediately the whole message of cherish your life and cherish the lives of others grabbed me. I fell in love with it for that reason.

When did you decide that you wanted to write a book about Saw? Was it after all of the films ended?

My sophomore year of college I finally started to realize that I was learning things in my philosophy class that were connected to things in the Saw movies. I went to the head if the Philosophy Department and asked, “Can I write my thesis about this?” He said, “Yeah, OK.” So, I started planning it out and I wrote it as my thesis, initially; and then, in 2012, I realized I could turn this into a book and put it out there. It took a while to do that because there’s a lot of stuff I had to cut out for my thesis version because I had a page requirement and I was way over it. So, I added all of that back in and polished it up into its current form.

Are you working on any new projects?

Yes, I’m working on a new book. It’s going to come out in October; it’s almost done. It’s called The American Monster. It’s an analysis of the human monster and slasher movies and how they connect to American history, and what events led to the rise in popularity of the human monster…and where I think that fad died out.

Now we’re in a time of demons and ghosts. The last human monster movie I remember watching was The Collection in 2012. It will essentially be an analysis of that history, from Psycho to The Collection. That’ll be out this year.

The other big reason for me going to Monster-Mania this time around was to see Lin Shaye, a terrific actress who has been in several of my favorite films, including Wes Craven’s New Nightmare and Detroit Rock City. I was fortunate enough to interview Lin while at the event, which was a real treat. 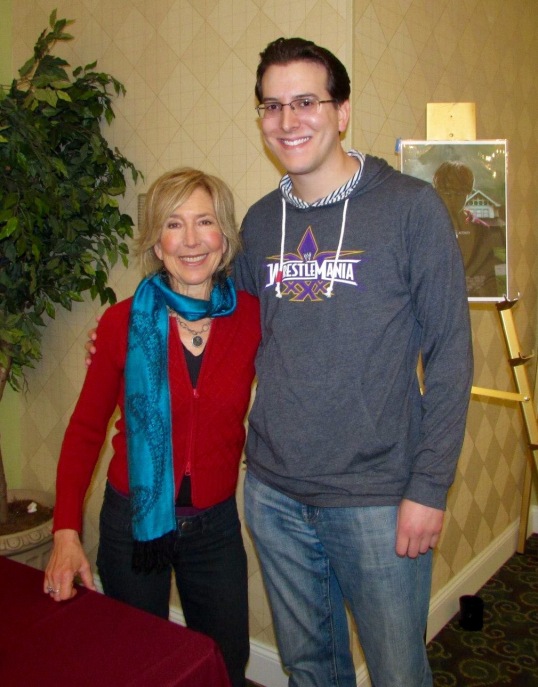 Meeting Lin Shaye, a prolific actress known for her horror and comedic roles.

I know your brother Bob ran New Line Cinema for many years. But how did you break into the film industry?

I was an actress before he did New Line, actually. I just always loved storytelling, and being a storyteller. I would act in school plays but never thought of it as a profession when I was younger. I was an art history major and I managed to be in every play I could get myself into.

I got a job at the Metropolitan Museum of Art and I liked it but I missed doing shows. Then I realized there was a profession (laughs) called acting, and I ended up going to Columbia after being accepted into its Master of Fine Arts program for acting, which had just launched. I finished the program and segued into off-Broadway theater. I did theater in New York for many years.

I never really thought I could do it for a career but I love acting. I love trying to find the answers to someone else’s questions, and that’s what drives me.

What is your brother, Bob, up to nowadays?

Bob has a new company called Unique Features. He’s gone back to his old model, really, of working on movies with budgets between $1 and $5 million. It’s terrific because it’s what he loves doing the most.

I’m a big KISS fan and loved you in Detroit Rock City. Did you get to interact with the band at all?

Absolutely. They were there all the time and they were all nice guys. Gene Simmons was very funny, smart and loyal…in his own way (laughs). Whatever that might be. You might have to ask Shannon Tweed what that means (laughs). They love each other and they’ve been together for a long time. They’re very loyal.

At the time we filmed the original band was still together: Ace Frehley, Paul Stanley, Gene Simmons, and Peter Criss. They were all nice guys. It was a great experience.

You’ve been in several installments in the Nightmare on Elm Street series. What’s it like being part of such a rich horror legacy?

Well, when the original was made we didn’t know it was going to be anything other than a low-budget horror film. But it turned into something much bigger than that, and I’m grateful for it. It was a happy surprise.

With Costas Mandylor of the Saw films.

I also had the opportunity to meet and interview Costas Mandylor, the lead actor in several of the Saw films.

Your first appearance in the Saw movies was in Saw III. Then, you went on to play a prominent role in the subsequent sequels. What was it like stepping into such a popular horror franchise?

Well, I knew for a fact that it was its own beautiful ship sailing because it had been so successful. But I didn’t know that it would continue after Saw III. When I found out it would happen, my main objective was to not do anything wrong or get in the way of this successful juggernaut, which it was at the time.

So, I fit into it very nicely, and Tobin was very gracious. He taught me the ropes as an actor and showed me how to care about it. And how to have some fun while delivering the lines, as a character in the movie. Nobody complained that I was in it, so I was happy.

I thought you were terrific in the Saw movies you were in. And I kept telling my friend, “He kind of looks like Sylvester Stallone.” Did you ever have anyone tell you that?

A lot of times franchises sag toward the end, but I thought you helped keep it interesting.

Well, in time it went a little bit that way…in 6 or 7. But I felt that I didn’t hurt it, and that was my main objective from the beginning.

I thought you did a terrific job emoting too. Many times your facial expressions in the films said all there was to say.

Thank you. I really appreciate it.

With Sean Cunningham, the creator of the Friday the 13th series.

Monster-Mania is a fun event that every horror fan should attend at least once. It’s filled with interesting activities, actors and merchandise to keep even the most die-hard fan busy for hours on end. Monster-Mania 30 was my third time attending, and I’m sure it won’t be my last.