KISS Exercises Its Freedom To Rock

Last week I saw the greatest live spectacle on Earth: KISS. This was my 11th time seeing the band perform live, if you include the concerts I’ve attended and performances I’ve seen on the KISS Kruise and during backstage meet and greets. Speaking of meet and greets, thanks to the generosity and kindness of one of the band members, my cousin and I were part of KISS’ meet and greet in Allentown. Being able to share this amazing moment with my best friend and someone who loves KISS as much as I do, made for a special night neither of us will forget. 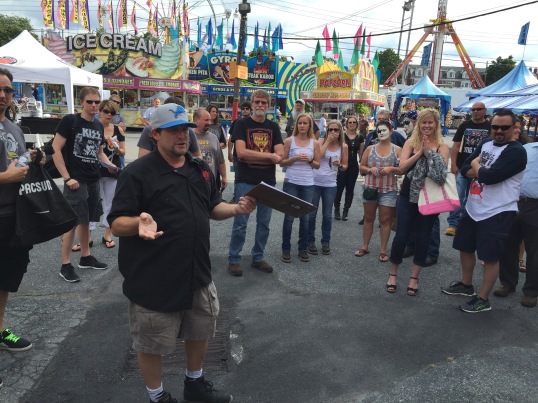 Upon arriving at the box office, Dean Snowden, who handles KISS’ VIP meet and greets, filled everyone in on what to expect. He then checked everyone in, gave people their meet and greet swag, and we were walked to the area where KISS was going to perform its private acoustic set. Once we walked through the door, I told my cousin to follow me and we quickly secured excellent spots that were front and center, just inches from Paul Stanley’s microphone.

After KISS entered the room and took the stage to the deafening approval of the fans in the room, Paul Stanley said, “This is the largest meet and greet we’ve ever done.” He wasn’t kidding. There were at least 100 fans in attendance. Normally, the band limits these meet and greets to approximately 25 people.

While the room was rather dark and extremely hot, no one complained. After all, we were seeing our idols perform a special concert for us and we were moments from meeting them. I’ve been fortunate enough to meet the band multiple times, but it never loses its luster. KISS fans have a unique connection with the band that’s hard to find in the music industry. It’s one of the many reasons why KISS is still a juggernaut when it comes to touring and merchandising, even after 40+ years.

During the acoustic set, KISS played a handful of crowd-pleasers. Having seen them perform acoustically prior to this meet and greet, I knew what to expect. But, for me, what made it enjoyable was seeing my cousin’s reaction to the show, as well as sharing the moment with other fans in attendance with whom I’m friendly.

All of the songs put KISS’ expert musicianship on display, and Eric Singer’s drumming – both during the acoustic set and the full-fledged concert later that evening – was exceptional. As I’ve said before, he’s the best drummer KISS has ever had, and he’s my favorite drummer. Speaking of Eric, he stopped the acoustic set to point out to Paul my t-shirt, which was a closeup of Paul Stanley’s face. Eric asked me where I got the shirt and I told him that I got it on RageOn.com.

My cousin and I got three guitar picks during the meet and greet. We each got picks from Gene, Tommy and Paul, and Eric made it a point to give drumsticks to children in the crowd, which was cool. Paul also took selfies with fans while playing guitar. After the acoustic set, fans were asked to outline the perimeter of the room and the band came by to meet everyone.

Each of the members of KISS autographed two items for fans, and they were nice enough to take photos with me too. When Eric Singer came by, he started talking about my shirt again and asked me more questions, even as he started to make his way down the line to meet more fans. Clearly, he really loved my RageOn KISS shirt. Wait till he sees the one I have ready to go for my photo with the band on the upcoming KISS Kruise, which is focused on celebrating the band’s iconic album Creatures of the Night.

I had all of the band members autograph my photo with them from KISS Kruise IV, where we’re all “Dressed to Kill,” as well as a setlist from the 2014 KISS concert I attended. While signing my setlist, Gene said to me, “Where did you get this?” I said, “From Paul.” He said, “Paul who?” I replied, “His last name is Stanley. You might know him.” 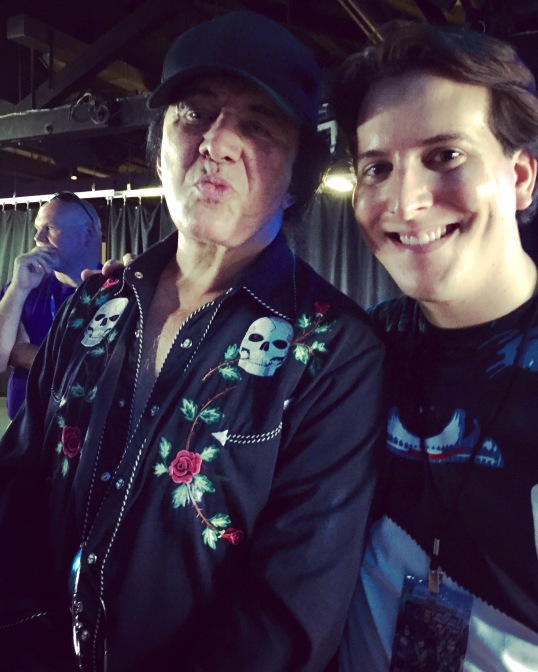 After the acoustic concert and the meet and greet, my cousin and I were able to breath a sigh of relief. We met up with his wife, who also came to the concert with us, showed her our autographed goods and photos and filled her in on all of the details of what we had just experienced.

During our time between the meet and greet and the concert, the three of us ate and prepared for the show. While the Dead Daises warmed up the crowd, Chris and I had to report to an area next to the stage to be escorted, along with the other 98 fans, to the backstage area where KISS was taking photos. For the photo op, KISS was in full gear and makeup, and they stood in front of a gigantic American-flag themed KISS logo.

I asked KISS’ head of security if we could get individual photos with the band as well as one together and he said, “Of course.” We approached the front of the line, I filled the guy in on what we are doing and he said to the photographer, “We’ve got a one-two-one here.” I was up first. Gene and Paul stuck out their hands for me to fist bump and I obliged, and Eric greeted me by jokingly poking me in the chest with his drumsticks. I turned around, kept my eyes opened, smiled and hoped for the best.

Then Chris jumped in and I moved over. Gene stuck out his hand for a fist bump. Chris didn’t notice this and I wanted to tell him but I also didn’t want to screw up our photo. So, I turned toward the camera and we both smiled. Thankfully, all of the photos that were shot of us turned out great.

The day before the concert I got a photo pass for KISS. This gave me the privilege of being able to take photos of the band from the pit, which is located between the front row barrier and the stage, for the first two songs. For anyone who hasn’t done this, it’s an amazing experience. KISS is one of the best bands to shoot because of its stage show and because they like to play to the cameras. As you can see from the photo at the top of this post, I got an amazing photo of Paul right in front of my camera. To get this shot, I almost got kicked in the face by him as he sat down on the edge of the stage. Nearly getting knocked out by the Starchild was worth the risk as I got some terrific photos.

Being in the pit also gave me a unique view most fans never see: the legendary KISS curtain dropping with a full view of the band as the curtain hits the floor.

Here's what the opening of a #KISS #concert looks like from the back/side of the legendary curtain. #Music #KISSArmy #ClassicRock

Once my time in the pit was up, I worked my way back to my seat and enjoyed the show. And what a show it was. Thirteen rows from the stage, on Gene’s side, Chris, Dina (his wife) and I let the energy of the band and the crowd wash over us as KISS did what they do best: rock.

KISS played the typical standards, but they also added a rare gem to the setlist: “Flaming Youth.” This track hasn’t been played on a tour since Destroyer was released back in the 1970s. For KISS, a band that’s known for sticking with what’s tried and true, I was impressed that they dusted off this deep cut for this tour.

Chris was telling me all night how impressed he was with Eric Singer’s drumming capabilities. Right before “Psycho Circus” started I told him, “Wait till you see him play drums on this one.” Eric Singer’s precision playing is a sight to behold. Whether he was hitting a symbol behind his back, twirling his sticks or flipping them in the air in between pounding the skins, he made it clear to everyone in attendance that he was in full command of the drums.

As with every KISS concert since the reunion tour, both Gene and Paul flew to different platforms for their signature songs, to the delight of the KISS Army. Gene’s blood-spitting and fire-breathing was also on full display, and throughout the evening he belted out several KISS classics, including “God of Thunder” and “War Machine.”

Toward the end of the concert, KISS brought out a gigantic check and made a $150,000 donation to Hiring Our Heroes. Apparently, the band is donating $150,000 per show to this worthy nonprofit. Following the donation, the band’s lead guitarist, Tommy Thayer, performed an instrumental version of the “Star Spangled Banner” that went straight into “Rock And Roll All Nite.” 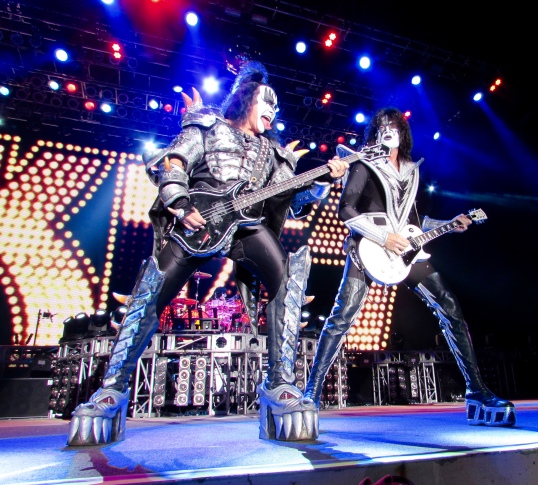 A KISS concert is an experience like no other. If he were still alive, Jimi Hendrix would describe it as electric church. It’s an environment brimming with positivity and possibility where everyone is united by their love of music. This joyous expression was the impetus for the formation of the KISS Army so many years ago, and it’s what keeps fans coming back more than four decades later. Long live KISS!