A Conversation With Chip Z’Nuff 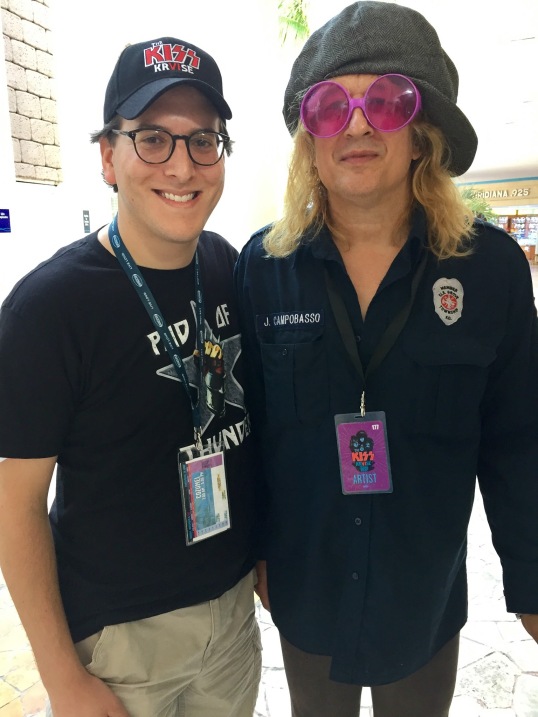 The classic rock band Enuff Z’Nuff just released Clowns Lounge, a collection of rarities and early demos that have been partially reworked and re-recorded by the band. This exceptional collection also features a guest appearance from the late Jani Lane, of Warrant, as well as an appearance from James Young of Styx on “The Devil Of Shakespeare.” Prior to the release of this excellent album, I had the opportunity to interview the band’s founder and bassist, Chip Z’Nuff. Check out our discussion below, pick up a copy of Clowns Lounge and look out for Enuff Z’Nuff in early 2017 when they’re touring with KISS’ original guitarist, Ace Frehley.

Enuff Z’Nuff has a new album out, Clowns Lounge. What can fans expect from this record?

It’s another rock-solid glitter-rock record from Enuff Z’Nuff. Still breathing after all these years, we’re one of the dinosaurs that’s still left, which is a good thing, I think. If you’re an Enuff Z’Nuff fan and you’ve listened to us for years and know about our roots, you’ll be pleasantly surprised by this album. There are 12 rock-solid songs, great production and the band is on fire. If you’re a new fan and you hear this album, you’ll be tickled pink.

It’s a strange time to be putting a record out, at the end of 2016. It’s the first major label we’ve been on in 20 years. I started up this band in 1984. I was a little kid. Donnie Vie and I had a vision and a dream. The competition was stacked up against us beyond belief. For five years we hashed it out in the clubs and in our bedroom writing songs until one day a guy named Doc McGhee recognized the band. He was nice enough to pass our cassette tapes out to some people, and that resulted in us getting our big break.

I was listening to Clowns Lounge recently and I think it’s very good. Great vocals, lots of terrific hooks – I really enjoyed it. It’s a solid melodic rock record.

These are songs we’ve had for years and I think they’re all well written. We went back into the studio when the opportunity presented itself. I had six or seven albums worth of material.

You’re going to be touring with Ace Frehley to support this new album, correct?

There’s the cherry on top of this sundae. This new album has presented us with some great opportunities, and the band is doing really well right now. And for Ace to ask us to be the supporting act on his tour for a couple of months, that is exciting beyond belief. There are going to be some people out there, and it’s up to us to strap it on, get the fuck out there and work. I’m excited about that opportunity.

Ace is great live, by the way. He’s been clean for, like, eight years. Not doing anything at all. Totally focused, and he’s got a great band behind him. It’s going to be quite a challenge for Enuff Z’Nuff. It’s a hard rock tour for sure and we plan on winning those fans over.

I saw Enuff Z’Nuff for the first time on KISS Kruise VI, this past November, and I thought you were great. What was it like being on the KISS Kruise?

It was a dream come true. I’ve known Gene and Paul for a long time and we’ve shared the same manger, Doc McGhee, for years. We’ve actually been with Doc longer. He was with us in the early days, when we put our first album out.

Earlier this year when I was doing the Rock and Roll Fantasy Camp, Don Felder and Paul Stanley were the featured guests. I was a counselor. Paul Stanley and I were backstage at the Whiskey a Go Go. My band was going to play a KISS song: “Deuce.” It was just me and Paul backstage and he said, “Hey, man. Why don’t you guys do the KISS Kruise with us? We asked you guys last year and you weren’t available.” I said, “Well, we were in a different place then, Paul. We’d love to do it with you.” He responded, “Would you like to do it this year?” I said, “Yeah, I’d love to.” Then Paul said, “Give me that phone.” He called up Doc McGhee and told him right then and there that he wanted Enuff Z’Nuff on the KISS Kruise. Then he said to me, “OK, Chip. I’ll see you in November!” It was a 30-second conversation. I was so excited. (laughs)

I thought the KISS Kruise was fantastic. It exposed us to people who may have not given us a chance the first time around. We got to make some inroads, and it was a nice start to this race for us. And now with this brand-new record, we’ll see what happens. The KISS fans are loyal beyond belief. If they get behind you, they can really make a difference.

I know what you mean. I’ve noticed how KISS fans have grown to love The Dead Daises, as a result of all of the things they’ve done with KISS, including multiple KISS Kruises and tours.

I’ve seen that too. It definitely gives you some wings. If you take that and do a couple more things, like our upcoming tour with Ace, you can really make things happen. People start to pay attention. Putting out a great record is not enough. You have to tour nowadays. All bands do. We want to make it great and keep going. It’s going to take a lot of hard work.

One thought on “A Conversation With Chip Z’Nuff”