Archive for the tag “Pro Wrestling”

The Ultimate Warrior was my favorite wrestler as a child. His colorful, high-energy, over-the-top persona grabbed my attention and captivated my imagination. There were mat tacticians, high-flyers, brawlers, and then there was the Ultimate Warrior. He was an amalgamation of styles, which made him unique. He had a more impressive physique than Hulk Hogan, colorful attire that rivaled Macho Man Randy Savage’s iconic outfits, and he could fly around the ring like in a way unlike anyone his size was doing. Unfortunately, Warrior’s life was cut short at the age of 54. He died on April 8, 2014. I saw him the day before. Thankfully, there are several ways to reflect on the man and his career, including Ultimate Warrior: A Life Lived Forever, a beautiful hardback book from Insight Editions.

END_OF_DOCUMENT_TOKEN_TO_BE_REPLACED 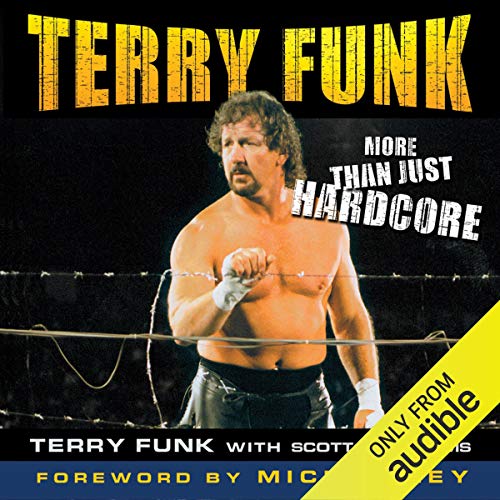 Terry Funk is one of the most influential wrestlers of all time. With a career spanning decades, you’d think that his autobiography, More Than Just Hardcore, would be fascinating. While this Audible Original was an easy and entertaining listen, it didn’t blow my mind. There weren’t any shocking revelations, dirt on other wrestlers, or anything of that nature. What you get here is the story of a man who is content with the life he’s lived. To me, that makes for an inspiring audiobook replete with life lessons.

END_OF_DOCUMENT_TOKEN_TO_BE_REPLACED

From 2002 through most of 2014 Justin Roberts served as one of WWE’s ring announcers. Fans who watched WWE during that time period, no doubt, recognize his signature sound, including the way he’d elongate “Johnnnnnnn Ceeeeeena!” Roberts is now the man behind the mic at All Elite Wrestling, the hot upstart in the pro wrestling industry. However, if you’re interested in reading (or listening to) his journey through the world of WWE, Best Seat In The House is your opportunity to do so.

END_OF_DOCUMENT_TOKEN_TO_BE_REPLACED 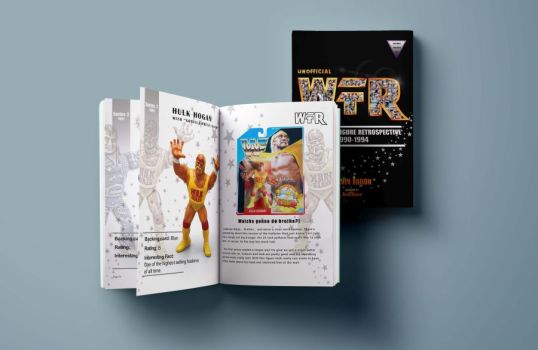 I am a big pro wrestling fan. Growing up in the 1990s means I have fond memories of the wildly popular WWF Hasbro action figures that came out during the first few years of that decade. Crazy, over-the-top commercials promoting the wild and wacky toys, including a miniature WWF ring where my tiny titans could battle it out to become the World Wrestling Federation Champion! It was a glorious time to be a fan, and I still own my WWF Hasbro figures. When I heard that a book came out celebrating these cherished WWF Hasbro figures, I knew I had to check it out. So, is this 388-page tome of pro wrestling action figures’ glory days worth buying? Read on for my thoughts on The Unofficial Wrestling Figure Retrospective 1990-1994.

END_OF_DOCUMENT_TOKEN_TO_BE_REPLACED

WWE: Kicking Down Doors, a new book from DK, highlights the female superstars who are at the forefront of WWE’s Women’s Evolution. Relive the very first all-women pay-per-view event, discover how legends such as Wendi Richter, Chyna, and Lita proved their dominance in the ring and chart their progression from glamorous sidekicks to fierce and fabulous Divas to the powerful superstars of today. Celebrate the likes of “The Man” Becky Lynch, “The Queen” Charlotte Flair, Naomi, Nia Jax, and Ronda Rousey as they set a new gold standard in WWE.

END_OF_DOCUMENT_TOKEN_TO_BE_REPLACED

I grew up watching professional wrestling in the early 1990s, and I still watch it today. Throughout the 1990s and the 2000s, Bob Holly was a fixture in the WWE. His character changed from race-car-driver “Sparky Plugg,” to Hardcore Holly — a no-nonsense wrestler during the “Attitude Era,” when wrestling was more popular than ever. The Hardcore Truth is Bob Holly’s autobiography, and the audiobook version is an Audible Original. The narrator does an excellent job of delivering the content in a direct and impactful way. What I found most interesting about The Hardcore Truth is that Bob spills the beans on anyone and everyone. He dishes dirt on everyone from Triple H to Diamond Dallas Page, with no reservations. I went into this audiobook respecting Bob Holly’s work, and I left it feeling like I knew the man behind the wrestler. He’s been called a bully and tough to work with, and I can see why people might think that. Nevertheless, if you’re a fan of the WWE from the 1990s and 2000s, there’s a lot to enjoy in The Hardcore Truth. It’s a tell-all book from someone who was there for Owen Hart’s death, the Chris Benoit double-murder-suicide, and other fascinating, and sometimes grim, milestones in wrestling. It’s one of the best pro wrestling audiobooks available, and I highly recommend checking it out.

In March 2019 I met Joe Bob Briggs, the wildly popular authority on drive-in movies who currently hosts horror movie marathons on Shudder, as well as The Last Drive-In: a weekly double-movie marathon featuring Joe Bob’s hilarious and insightful musings, Darcy “The Mail Girl,” and special guests. Speaking of which, Season 2 of The Last Drive-In airs this Friday at 9 p.m. ET and it features guest co-host Chris Jericho. Read on for my interview with the legendary Joe Bob Briggs, where we discuss horror movies, wrestling, books, and more.

END_OF_DOCUMENT_TOKEN_TO_BE_REPLACED 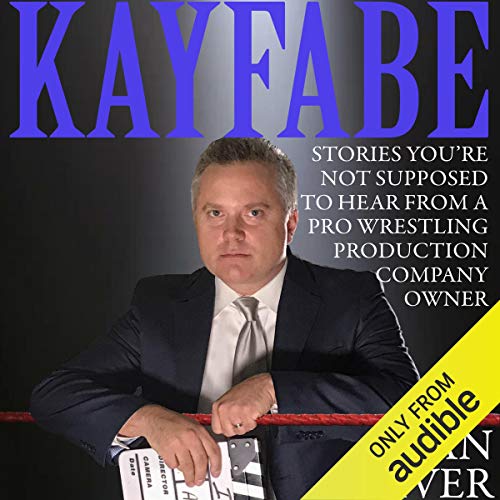 Are you a wrestling fan holed up in your house because of the Coronavirus? If so, then you’ve got plenty of time to catch up on great wrestling books. Kayfabe by Sean Oliver is one of those books. Narrated by the author, Kayfabe is a collection of personal stories from the founder of Kayfabe Commentaries, a professional wrestling shoot interview company. The only complaint I have is that the editing of this audiobook is a little sloppy. For example, there were at least a couple times when the author did a second take of a line and both were included in the final version of this Audible Original. I’ve encountered this before with other audiobooks; however, it’s something that should have been caught and corrected in the editing process.

END_OF_DOCUMENT_TOKEN_TO_BE_REPLACED 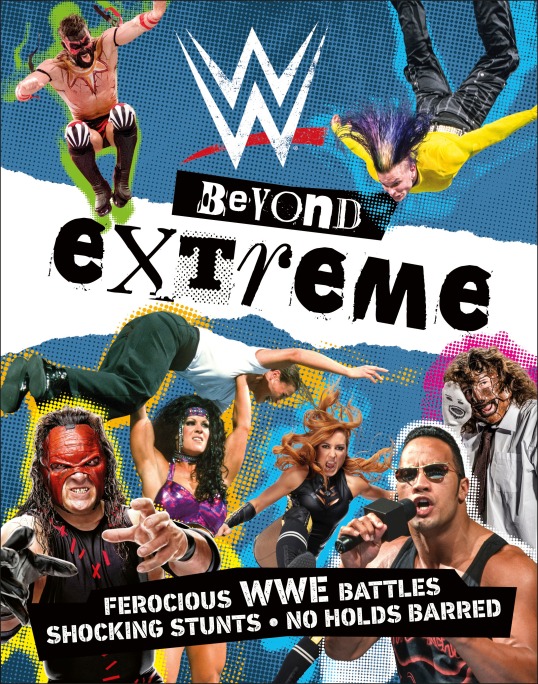 DK Publishing is back with another action-packed WWE book. In WWE Beyond Extreme you get 127 pages of high-flying, over-the-top WWE goodness from past and present to satiate even the most voracious of fans. Check out my video review below to learn more and get a preview of what’s inside. 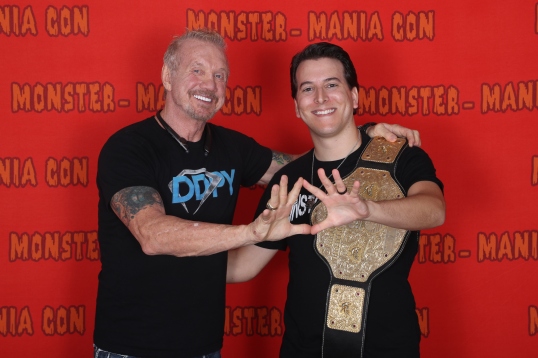 I’ve attended Monster-Mania in Cherry Hill numerous times, including this past August when I met Clive Barker. However, I’ve never gone to the events they put on in Maryland. When I saw that my friend Diamond Dallas Page was going to be there, I decided to make the trip. I hadn’t seen him since I attended his DDP Yoga workshop in July, and I also wanted to get a great professional photo with him. This was my chance to make that happen.