Archive for the tag “Evil Dead”

Evil Dead: The Musical is at The Prince Music Theater in Philadelphia from September 25-October 20.

Evil Dead: The Musical, a show that made its debut in Toronto in 2003 and has had many successful productions around the world since, has just come to Philadelphia. It will be at The Prince Music Theater from September 25-October 20, 2013, so be sure to get your tickets now. I had the pleasure of seeing the musical last night, and I can confidently say that whether you’re a fan of the film franchise or someone who loves fun musicals infused with irreverent humor, Evil Dead: The Musical delivers.

When I approached the box office to get my ticket, I was asked if I’d like to sit in the “splatter zone.” After asking what she meant, the woman behind the glass partition explained that at the end of the show the first few rows get “blood” on them. While the fake blood washes out pretty easily, I decided to sit a few rows back. I must admit, at the end of the show, watching people get squirted, misted and splattered with blood was very amusing; a handful of them wore ponchos, while the others took it in stride. 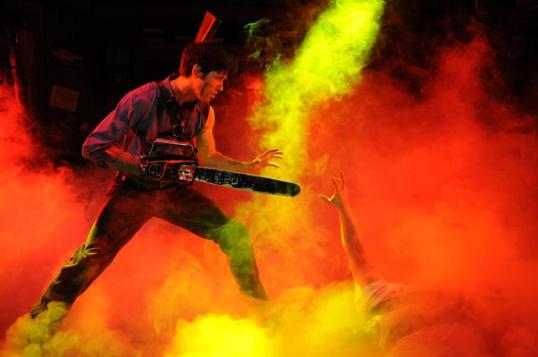 While waiting for the show to begin, I was treated to mix of classic 1980’s rock music – which I love – including, KISS, The Scorpions and Twisted Sister, among others. It was a great way to set the mood for a fun show based on a horror franchise born out of the same era. And the music was reflective of the jovial mood in the room. The fans were eagerly awaiting the dimming of the lights and the rising curtain.

The musical kicked off with a fun, infectious song, “Cabin in the Woods,” that did a great job of setting the tone for the show. It also provided the shows’ five central stars with the perfect opportunity to showcase their chemistry with one another and vocal prowess.

The next musical number, “Housewares Employee,” was easily my favorite. Ryan Ward, who plays the lead character, Ash, stole the show and this song illustrates why he was the perfect person for the role. He’s funny, has an impressive voice and can convincingly sing wonderfully absurd power ballads. What’s not to love?

Another fun song that stuck with me was “What The Fuck Was That.” After a character becomes possessed by the Evil Dead, Ash and Scott sing and, eventually, tango to this number. It made for a fun and humorous break in the action.

Other than Ash, my favorite character was Jake. This role was masterfully assumed by Daniel Williston, who did a terrific job both with his lines and body language. At one point, his ear piece came out, in the middle of a dance number, but he quickly tucked it into his pocket and kept dancing, undeterred. In addition to being light on his feet, Williston turned in an impressive vocal with “Good Old Reliable Jake” that conjured up visions of Meat Loaf. This song, along with the others I mentioned, make listening to the full album worth your while.

In case it’s not already abundantly clear, Evil Dead: The Musical is a lot of fun. If you live in Philadelphia and you’re looking for something unique and exciting to do, make sure to see the show. It’s a great tribute to the films that inspired it, as well as an impressive musical production.

Evil Dead is the most shocking, violent and bloody horror film I’ve ever seen. This 2013 reboot of the classic film franchise was produced by the original team behind the 1981 cult classic. I can’t compare Evil Dead to its predecessors because I don’t recall seeing any of them from start to finish, which is shocking since I’m an ardent fan of horror movies. Nonetheless, I can tell you with great confidence that this movie is only meant to be seen by those who don’t mind a lot of gore. If you have a weak stomach, steer clear of this one. However, if you’re game, what you’ll find here is a gritty horror film with excellent acting, terrific cinematography and a compelling narrative. I also enjoyed Evil Dead’s score. Whether it was a tender moment or an adrenaline-infused showdown, the music elevated the visuals and amplified the emotion in every scene. For horror fans with a strong stomach, I can’t recommend Evil Dead enough. It’s one of the most disturbing films I’ve ever seen, and also one of the most satisfying.