Archive for the tag “Jack Black” 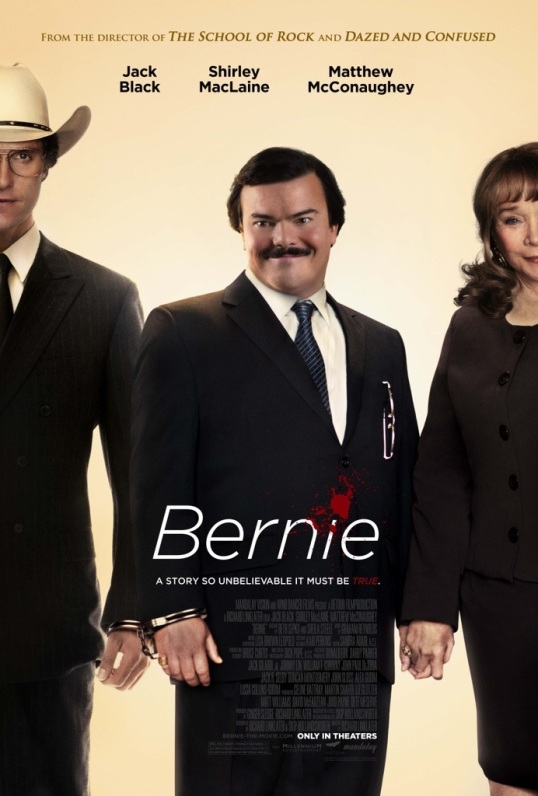 I just watched Bernie, a dark comedy starring Jack Black, Shirley MacLaine and Matthew McConaughey. Based on true events, the film focuses on the relationship between the lovable Bernie Tiede, played by Black, and the grumpy 80-year-old millionaire, Majorie Nugent, played by Shirley MacLaine.

Since first taking notice of Jack Black in High Fidelity, I’ve been a big fan of his work, on and off the screen. In Bernie, he takes his acting ability to another level and melds his music and thespian talents like never before. In addition to being both funny and believably dramatic, Black sings several times in the film, providing his formidable voice with the opportunity to shine.

While Jack Black stole the show, the other actors in the film did a wonderful job of drawing me into the film’s premise. Shirley MacLaine was delightfully obstinate and grouchy, and Matthew McConaughey, while unremarkable, served well in his role too.

I went into Bernie not knowing what to expect, and I left it feeling completely satisfied. It was time well spent and it deserves your attention. To whet your appetite, below is the official synopsis and trailer.

In the tiny, rural town of Carthage, TX, assistant funeral director Bernie Tiede was one of the town’s most beloved residents. He taught Sunday school, sang in the church choir and was always willing to lend a helping hand. Everyone loved and appreciated Bernie, so it came as no surprise when he befriended Marjorie Nugent, an affluent widow who was as well known for her sour attitude as her fortune. Bernie frequently traveled with Marjorie and even managed her banking affairs. Marjorie quickly became fully dependent on Bernie and his generosity and Bernie struggled to meet her increasing demands. Bernie continued to handle her affairs, and the townspeople went months without seeing Marjorie. The people of Carthage were shocked when it was reported that Marjorie Nugent had been dead for some time, and Bernie Tiede was being charged with the murder.